what does sinn fein’s victory mean for northern ireland 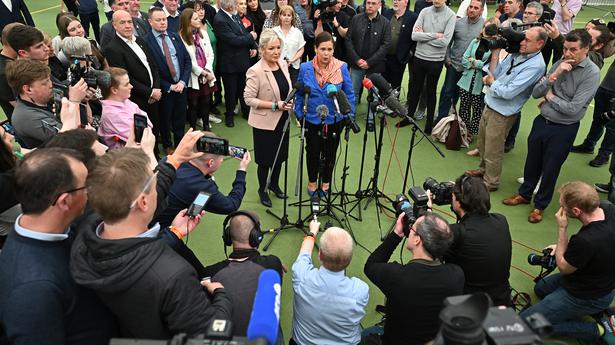 What is the Good Friday Agreement? Will there be changes in the Northern Ireland Protocol?

What is the Good Friday Agreement? Will there be changes in the Northern Ireland Protocol?

The story so far: Northern Ireland came into existence in 1921 when Ireland was partitioned by the Government of Ireland Act, 1920 passed by the British parliament. Sectarian tensions between the Protestants and Catholics led to a 30-year period of militant strife, called The Troubles, which began in the late 1960s and continued until the signing of the Good Friday Agreement in 1998. Sinn Féin, since 1921, never won a decisive vote. This changed on May 7, 2022 as it was declared that Sinn Féin had won 27 seats out of 90 or 29% of the preference vote, while its closest unionist competitor, the Democratic Unionist Party (DUP), dropped its seat tally to 25. The right-wing DUP haemorrhaged voters that were mostly picked up by its hardline right-wing competitor, the Traditional Unionist Voice (TUV). These important shifts have raised concerns in Northern Ireland about the future of its union with the United Kingdom. How did Northern Ireland get to this point in history?

When did the Good Friday Agreement come into existence?

The Good Friday Agreement came into existence in April 1998. It was constructed in a manner that would be favourable to the rights and political representation of both Protestant and Catholic communities in Northern Ireland with the aim to eliminate violence. The Agreement recognised the legitimacy of both republican and loyalist demands and institutionalised a system of devolved government, power-sharing and elections to the unicameral local assembly (called Stormont) using the principle of Single Transferable Vote to ensure proportional representation. Any MLA elected to the Stormont has to declare themselves “unionist”, “nationalist” or “other”. Typically, the largest designations tend to be unionist or nationalist. For instance, the Democratic Unionist Party (DUP), the Ulster Unionist Party (UUP) and the Traditional Unionist Voice (TUV) are unionist parties. Similarly, Sinn Féin and the Social Democratic and Labour Party (SDLP) are considered nationalists.

The First Minister and Deputy First Minister in Northern Ireland have to be picked. Both have the same powers but are not supposed to be from the same party or same designated camp. This means that no government can be formed in Stormont without the mandatory combination of the two largest parties from across designations.

How did Brexit impact the electoral results in Northern Ireland?

Britain’s messy divorce from the European Union (EU), better known as Brexit, impacted relations between Northern Ireland and the U.K. In 2019, the U.K. and the EU agreed to the Northern Irish Protocol wherein a trade-and-customs sea border was created between Northern Ireland and the rest of the U.K. Further, the rationale for the Protocol was that establishing a trade-and-customs border on the island between North and South was a sure way to stoke nationalist ire that could undermine the Good Friday Agreement’s commitment to peace and consociationalism. While the Protocol is popular with nationalists, it proved to be immensely unpopular with unionist parties in Northern Ireland as they felt that the U.K. was pacifying nationalist sentiments. In 2021, violence broke out in Belfast’s Sandy Row loyalist neighbourhood and a loyalist paramilitary group withdrew support to the Good Friday Agreement. In February 2022, Paul Givan from the DUP resigned as First Minister, which meant that the Deputy First Minister from Sinn Féin, Michelle O’Neill, also lost her position.

If they are not appointed after four consecutive, six-week periods of negotiations, the Secretary of State for Northern Ireland has to propose a date for a new assembly election.

In the assembly elections that have recently concluded, it is clear that the Protocol led to shifts in the voting patterns as it became one of the many points of polarisation in Northern Ireland. The parties in favour of the Protocol, like Sinn Féin, improved their vote counts. However, voters were also taking other factors into consideration. Northern Ireland’s working-class voters are facing inflation and a cost-of-living crisis. The National Health Service (NHS) in Northern Ireland is struggling financially and is slow to provide healthcare with many waiting a year for critical medical procedures. A shift in traditional sectarian voting patterns is also rooted in these situations of uncertainty that voters are experiencing.

Will Northern Ireland have a new government?

As mentioned before, there can be no government in Northern Ireland unless each of the largest nationalist and unionist parties comes on board to form the government. The Sinn Féin cannot form a government unless the unionist DUP, which is the second-largest party in this election, agrees to do so as well. The requirement is for a First Minister from Sinn Féin and the Deputy First Minister from the DUP. The DUP, which has its own internal divisions, is unlikely to support a Sinn Féin-led government in protest against the Northern Irish Protocol. Jeffrey Donaldson, the DUP leader, has said that while he respects the results, his party will not participate in power-sharing until the issues with the Northern Irish Protocol are addressed by Boris Johnson’s government. On the other hand, Sinn Féin has not talked down the possibility of a border poll that would be a precursor to Irish reunification. This has unsettled unionist voters.

In February 2022, the Northern Ireland (Ministers, Elections and Petitions of Concern) Act 2022 came into force to restore faith in the devolved government process in Northern Ireland. Under this, if a First Minister and a Deputy First Minister have not been appointed after four consecutive, six-week periods of negotiations, the Secretary of State for Northern Ireland has to propose a date for a new assembly election. It remains to be seen if it will come to this point.

Vasundhara Sirnate is a political scientist and journalist