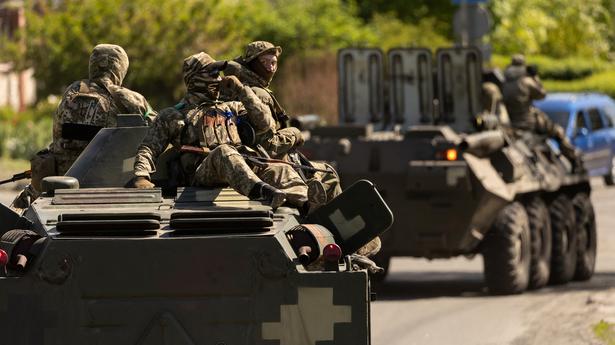 Ukrainian forces were braced to defend their final bastion in the devastated port city of Mariupol on Sunday, desperate to deny Russia a symbolic win on the eve of Moscow’s Victory Day celebrations.

Shelling and missile strikes have intensified in the build up to the Second World War anniversary, and rescuers are hunting for 60 Ukrainian civilians feared killed in the bombing of a village school.

President Volodymyr Zelensky marked the anniversary on the end of the World War by comparing Ukraine’s battle for national survival to the region’s war of resistance against its former Nazi occupiers.

“Decades after World War II, darkness has returned to Ukraine, and it has become black and white again,” Zelensky said, in a monochrome social media video shot against the backdrop of bombed out apartment block.

“Evil has returned, in a different uniform, under different slogans, but for the same purpose,” he warned, trying to turn Russia leader President Vladimir Putin’s “anti-Nazi” rhetoric back on itself.

Russia, meanwhile, was gearing up for a Victory Day parade designed to associate the invasion of its neighbour with the national pride felt over the Soviet Union’s defeat of Germany.

Zelensky was also to meet G7 leaders via video conference to discuss the crisis, and European diplomats were hammering out the details of their latest sanctions package against Moscow.

On the ground, the key battles were being fought in Ukraine’s east.

Civilians have now been evacuated from Mariupol’s Azovstal steelworks, leaving a small force of defenders holed up in its sprawling network of underground tunnels and bunkers.

The complex — the final pocket of Ukrainian resistance in the port city — has taken on a symbolic value.

“The enemy is trying to finish off the defenders of Azovstal, they are trying to do it before May 9 to give Vladimir Putin a gift,” warned Zelensky aide Oleksiy Arestovych.

Taking full control of Mariupol would also allow Moscow to create a land bridge between the Crimean peninsula, which it annexed in 2014, and regions run by pro-Russian separatists in the east.

In one of those regions, Lugansk, Ukrainian forces are now mounting a last ditch defence of the city of Severodonetsk, formerly an industrial city of 100,000 people, now Russia’s next target.

In the same region, governor Sergiy Gaiday said 60 civilians were feared dead after a school in the village of Bilogorivka was hit in an air strike.

“The bombs fell on the school and unfortunately it was completely destroyed. There were a total of 90 people, 27 were saved,” he said on Telegram.

“Sixty people who were in the school are very probably dead.”

Rescuers could not work overnight because of a threat of new strikes, but resumed their work on Sunday.

Rescuers were also looking for survivors in the neighbouring village of Shepilivka after a strike hit a house where 11 people were sheltering in the basement, Gaiday said.

Civilians who escape Mariupol describe passing through Russian “filtration” sites where several evacuees told AFP they were questioned, strip-searched, fingerprinted, and had their phones and documents checked.

“They asked us if we wanted to go to Russia… or stay and rebuild the city of Mariupol,” said Azovstal evacuee Natalia, who spoke on condition that her full name not be published.

“But how can I rebuild it? How can I return there if the city of Mariupol doesn’t exist anymore?”

International efforts to pressure the Russian leader continue, with G7 leaders, including US President Joe Biden, to talk with Zelensky on Sunday to discuss Western support for Kyiv.

Further sanctions or at least a tightening of the huge array of economic punishments already inflicted on Russia are expected to be discussed.

The Hindu45 mins ago
News