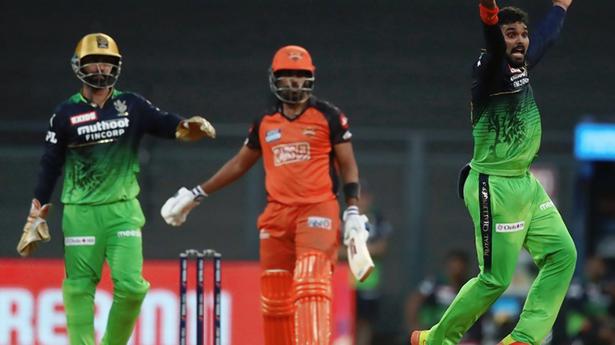 The wry smile followed by the trudge back to the dressing room said it all! Virat Kohli’s season of misery continues.

But his second golden duck within a fortnight didn’t stop Royal Challengers Bangalore from posting a 67-run victory against Sunrisers Hyderabad in the IPL at the Wankhede Stadium here on Sunday.

Like Kohli, Sunrisers captain Kane Williamson, who has been having an even worse tournament, was out first ball, which he wasn’t even facing. Unlike Royal Challengers, the Hyderabad franchise could not recover from a terrible start as it fell well short of the target of 193.

It was indeed a stunning cameo from the Tamil Nadu wicketkeeper. He hit three successive sixes and then a four in the final over, bowled by Fazalhaq Farooqi, the left-arm seamer from Afghanishtan making his debut in the competition.

The first of those sixes though was actually a dropped catch by Rahul Tripathi at deep square-leg; 25 came off the over.

Karthik remained unbeaten for the eighth time in 12 innings this season. He now has 274 runs at a strike rate of 200 and an average of 68.50.

The Royal Challengers innings began in dramatic fashion. Williamson decided to open the bowling with the left-arm spin of J. Suchith. The first ball was a harmless half-volley, off which Kohli gave a comfortable catch to the Sunrisers captain at short midwicket.

But Patidar put on 105 for the second with his captain, off just 73 balls. That would prove crucial.

The Sunrisers’ chase began on the wrong foot, with non-striker Williamson being run-out by a direct hit from Shahbaz Ahmed from covers off the first ball. Then off the fifth ball, Maxwell knocked back the off-stump of Sunrisers’ leading run-getter, Abhishek Sharma, who tried to pull across the line.

Tripathi (58, 37b, 6×4, 2×6) and Aiden Markram (21, 27b) added 50 for the third wicket before the South African became one of Wanindu Hasaranga’s five victims. His splendid spell helped his side exact revenge for the nine-wicket defeat by Sunrisers a couple of weeks ago.