Ravi Kiran Kola, writer and showrunner of Vishwak Sen-starrer ‘Ashoka Vanamlo Arjuna Kalyanam’, on the making of the family drama 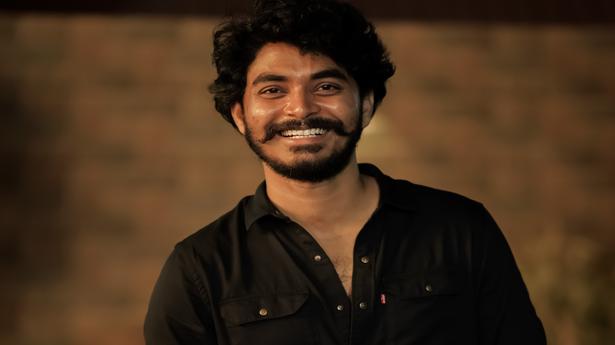 Ravi Kiran Kola, the writer and showrunner of ‘Ashoka Vanamlo Arjuna Kalyanam’ is all for realistic, entertaining stories

Ravi Kiran Kola, the writer and showrunner of ‘Ashoka Vanamlo Arjuna Kalyanam’ is all for realistic, entertaining stories

Ravi Kiran Kola’s left forearm bears an ambigram tattoo ‘Director’ (the font allows it to be read in two directions). He got inked even before he debuted as a writer and director with the Telugu film Raja Vaaru Rani Gaaru ( RVRG, 2019). Back then, he had written his final B.Tech exams and arrived in Hyderabad from East Godavari, determined to make it in the film industry. Now in his fifth year in Hyderabad, he is basking in the feedback for Ashoka Vanamlo Arjuna Kalyanam, which was released on Friday.

Ravi has penned the story, screenplay and dialogues and was also the showrunner of the film, while his friend Vidya Sagar Chinta, who was the cinematographer for RVRG, directed it. Ravi elaborates: “The concept of a showrunner is new to Telugu cinema, though a few Telugu web series have explored it. A showrunner envisions and oversees every aspect of a project, while the director executes it. It turned out to be more time consuming than directing.”

Asked why he did not direct the film, Ravi says he has been working on an ambitious political drama and wanted to devote more time to that

His debut film was an ode to his village Bhadravaram and surrounding areas in Yeleswaram mandal, East Godavari district, Andhra Pradesh. Ashoka Vanam… is also set in East Godavari and pits a family from the region with another family from Suryapet, Telangana: “I am conscious that all my stories should not originate from East Godavari; I do not want to get slotted. However, I tend to get many story ideas from that region.”

Ever since the film’s release, Ravi has been receiving calls from his native town, with people stating that they could see parts of themselves in the supporting characters in the family drama.

The idea of Ashoka Vanam… emerged during the first lockdown when Ravi came across a news article about a family from Odisha that arrived in Andhra Pradesh for a wedding and had to extend their stay as the lockdown was imposed. “I wondered what would happen if two families, one from Telangana and one from Andhra Pradesh, were caught in such a situation. The main story is about Arjun (Vishwak Sen) and the two female leads Rukshar Dhillon and Ritika Nayak.”

The idea of the protagonist being 30+, single and under pressure to get married, came from observing people known to him. One of Ravi’s friends who was earlier tasked to direct the film went through a similar situation, with his family insisting that he get married without delay and give up the opportunity of direction: “I could not understand why they thought directing a film would hinder his marriage plans. He turned 30 and his family was particular that his wedding should not be delayed. I was angry and channelled some of that in the dialogues.”

Cloaked in comedy, Ashoka Vanam… highlights a bunch of issues. Ravi mentions that he is aware of the skewed gender ratio in some castes in his native region: “Due to the short-sighted practices (such as female foeticide) in earlier days, some communities struggle to find a bride. I know instances where the boys opt for girls from different communities and also give gifts and money to her family.”

A crucial scene involving Vidya Sivalenka (the groom’s sister) and the conversation that follows, stresses on the importance of a girl child. Ravi adds, “We tried to weave in other issues into the story through the two leading women — the younger sister’s dream for financial independence and career goals and the older sister pointing out the caste prejudice her parents nurtured. Arjun’s telephonic conversations with his ex, Zarina, also underline the religious differences that might have come in their way.”

Finding a talented supporting cast and getting them to vibe together through informal workshops was a key factor for the family drama populated with a number of characters: “I used to enact each character with their peculiar traits to the producers. So they insisted I find actors who can pull it off.”

To look the part of a 33-year-old male protagonist who is not fit, is insecure and somewhat conscious of his looks, Vishwak Sen put on a few pounds. Ravi recalls how he forbid Vishwak from hitting the gym: “Vishwak is a promising actor and star material. We made him eat more. Gradually he took it upon himself to let go of his groomed look and dress down. He was a sport.”

Ashoka Vanam… was filmed between the COVID-19 waves and turned out to be a new learning experience for Ravi, Vidya Sagar and the team: “We had filmed RVRG like an indie crew, shooting at odd hours with limited resources. Through this film, I learnt about regulated working hours and the concept of call sheets.”

Ravi has four scripts ready, waiting to be made into feature films and web series. He used the pandemic downtime to write: “I want to narrate stories that feel authentic, whatever be the genre. I like to write realistic, flawed characters.”

If a handful of Telugu films in recent years — Care of Kancharapalem, Cinema Bandi, Uma Maheshwara Ugra Roopasya, Middle Class Melodies and Mallesham for example — have stayed true to hyper local milieus, Ravi reasons that the newer tribe of directors are eager to dismiss the notion that Telugu cinema cannot make films that are authentic and lived-in, unlike Malayalam cinema: “We are all out to prove that we can narrate stories that are close to reality and make them entertaining. I interact with people, a lot, to know about their lives.”

The Hindu Business Line13 mins ago
3