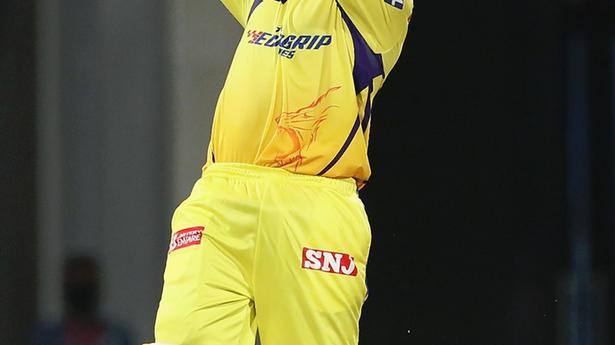 Opener makes 87 as the Chennai side amasses 208 and wins by 91 runs; Ruturaj, Dube and Dhoni also come good

Opener makes 87 as the Chennai side amasses 208 and wins by 91 runs; Ruturaj, Dube and Dhoni also come good

Kuldeep Yadav got clobbered for the second game in a row as Delhi Capitals found itself facing a daunting task against Chennai Super Kings in its IPL game at the D.Y. Patil Stadium here on Sunday.

Aided by an enterprising 110-run partnership between the opening pair of Devon Conway and Ruturaj Gaikwad, Super Kings rattled up 208 for six after being asked to bat.

Going after the spinners

Conway took a special liking for the Capitals spinners. He went down the track to hit a couple of sixes off Axar Patel during the PowerPlay.

Conway went after Kuldeep in his first over, dancing down the track to slam a six and slog-sweeping him for a six and a four.

With the ball coming on to the bat nicely, Kuldeep’s flighted deliveries were fodder for the batters and he was hit for three fours in a row in his second over.

It was Anrich Nortje who broke through, removing Ruturaj with a sharp bouncer as the opener’s pull landed in the hands of midwicket fielder Axar.

After a relatively slow start, Dube (32, 19b, 2×4, 2×6) provided the impetus in the 16th over, teeing off against Shardul Thakur. Dube was dropped off the second delivery of that over by Axar at deep square-leg and made Capitals pay by smashing two sixes and a four.

After Conway and Dube departed trying to accelerate, skipper M.S. Dhoni (21 n.o., 8b, 1×4, 2×6) had the fans on their feet as he provided the finishing touches.

Yellow was ubiquitous in the stands and the Super Kings supporters went ballistic as Dhoni tonked a six down the ground off Mitchell Marsh and cut the next delivery for four.

The Capitals left-arm seamer was, however, the pick of the bowlers as he finished with two for 28.

Nortje picked up three but proved costly as he conceded 42 in his four-over spell.

Capitals’ chase never took off as it lost openers K.S. Bharat and David Warner by the fifth over.

Mitchell Marsh and skipper Rishabh Pant added 36 for the third wicket before falling in quick succession to Moeen Ali (three for 13).

It was a day when Super Kings hardly put a foot wrong.