Ukraine says all civilians, including women and children, evacuated from Mariupol steel mill 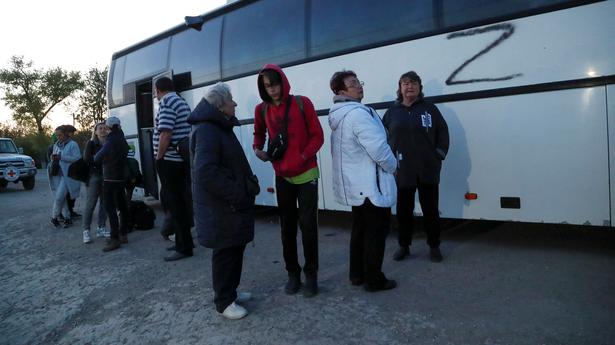 Russian forces kept up their barrage of southern Ukraine, hitting the major Black Sea port of Odesa with cruise missiles and bombarding the steelworks up the coast in Mariupol, where Ukrainian fighters remained trapped underground.

Moscow was aiming to complete its conquest of Mariupol in time for Victory Day celebrations on May 9. But its forces continued to face dogged resistance from defenders within the bunkers beneath the factory. All Civilians have been evacuated.

In a sign of the unexpectedly effective defense that has sustained the fighting into its 11th week, Ukraine’s military struck Russian positions on a Black Sea island that was captured in the war’s first days and has become a symbol of Ukrainian resistance.

The largest European conflict since World War II has developed into a punishing war of attrition that has killed thousands of people, forced millions to flee their homes and destroyed large swaths of some cities.

Ukrainian leaders warned that attacks would only worsen in the lead-up to Victory Day, when Russia celebrates Nazi Germany’s defeat in 1945 with military parades. Russian President Vladimir Putin is believed to want to proclaim some kind of triumph in Ukraine when he addresses the troops on Red Square on Monday.

U.S. Secretary of State Antony Blinken said on May 7 that Ukrainian President Volodymyr Zelenskyy and his people “embody the spirit of those who prevailed during the Second World War.” He accused Mr. Putin of trying “to twist history to attempt to justify his unprovoked and brutal war against Ukraine.”

“As war again rages in Europe, we must increase our resolve to resist those who now seek to manipulate historical memory in order to advance their own ambitions,” Mr. Blinken said in a statement as the United States and United Kingdom commemorate the Allied victory in Europe.

The most intense fighting in recent days has been in eastern Ukraine, where the two sides are entrenched in a fierce battle to capture or reclaim territory. Moscow’s offensive there has focused on the Donbas, where Russia-backed separatists have been fighting since 2014.

The governor of Luhansk region, one of two that make up the Donbas, said a Russian strike destroyed a school in the village of Bilogorivka where 90 people were seeking safety in the basement. Gov. Serhiy Haidai, who posted pictures of the burning rubble on the Telegram messaging app, said 30 people were rescued. Rescue work was ongoing.

Mr. Haidai also said two boys aged 11 and 14 were killed by Russian shelling in the town of Pryvillia, while two girls aged 8 and 12 and a 69-year-old woman were wounded.

In neighboring Moldova, Russian and separatists troops are on “full alert,” the Ukrainian military warned Sunday. The region has increasingly become a focus of worries that the conflict could expand beyond Ukraine’s borders.

Pro-Russian forces broke off the Transnistria section of Moldova in 1992, and Russian troops have been stationed there since, ostensibly as peacekeepers.

Those forces are on “full combat readiness,” Ukraine said, without giving details on how it came to the assessment.

Moscow has sought to sweep across southern Ukraine both to cut off the country from the sea and create a corridor to Transnistria. But it has struggled to achieve those objectives.

On May 7, six Russian cruise missiles fired from aircraft hit Odesa, where a curfew is in place until morning of May 10. Videos posted on social media showed thick black smoke rising over the Black Sea port city as sirens wailed.

The Odesa city council said four of the missiles hit a furniture company, with the shock waves and debris badly damaging high-rise apartment buildings. The other two missiles hit the Odesa airport, where the runway had already been taken out in a previous Russian attack.

A satellite image taken today morning and analysed by The Associated Press showed smoke rising from two sites on the island. On the island’s southern edge, a fire smoked next to debris. That corresponded to a video released by the Ukrainian military early Sunday showing its strike on a Russian helicopter that had flown to the island, possibly to aid troops wounded in attacks the day before.

An image taken early Saturday by Planet Labs PBC showed that most of the island’s buildings had been destroyed by Ukrainian drone attacks, as well as what appeared to be a Serna-class landing craft against the island’s northern beach.

In Mariupol, Ukrainian fighters made a final stand against a complete Russian takeover of the strategically important city, which would give Moscow a land bridge to the Crimean Peninsula, annexed from Ukraine during a 2014 invasion.

Satellite photos shot on May 6 by Planet Labs PBC showed vast devastation at the sprawling Azovstal seaside steel mill, the last pocket of Ukrainian resistance in the city. Buildings had gaping holes in the roofs, including one under which hundreds of fighters were likely hiding.

After rescuers evacuated the last civilians, Mr. Zelenskyy on May 7 said in his nightly address that the focus would turn to extracting the wounded and medics: “Of course, if everyone fulfills the agreements. Of course, if there are no lies.”

He added that work would also continue today on securing humanitarian corridors for residents of Mariupol and surrounding towns to leave.

The situation at the plant has drawn the world’s attention, with the United Nations and the International Committee of the Red Cross desperately trying to organize evacuations.

But Russian forces have intensified fire on the mill with mortars, artillery, truck-mounted rocket systems, aerial bombardment and shelling from the sea, making evacuation operations difficult.

Three Ukrainian fighters were reportedly killed and six more wounded during an evacuation attempt Friday. Capt. Sviatoslav Palamar, the deputy commander of the Azov Regiment, said his troops had waved white flags, and he accused Russian forces of firing an anti-tank weapon at a vehicle.

It remains unclear what will happen to the estimated 2,000 fighters at Azovstal, both those still in combat and the hundreds believed to be wounded. In recent days the Ukrainian government has been reaching out to international organizations to try to secure safe passage for them. The fighters have repeatedly vowed not to surrender.

Mr. Zelenskyy said officials were trying to find a way to evacuate them. He acknowledged the difficulty, but said: “We are not losing hope, we are not stopping. Every day we are looking for some diplomatic option that might work.”

Russian forces have probed the plant and even reached into its warren of tunnels, according to Ukrainian officials.

But Western military analysts said Ukrainian forces were making progress in securing positions around the city. The Ukrainian military said it retook control of five villages and part of a sixth.

A Washington-based think tank, the Institute for the Study of War, said Ukraine may be able to push Russian forces out of artillery range of Kharkiv in the coming days, providing a respite for the city and an opportunity to build the defenders’ momentum “into a successful, broader counteroffensive.”