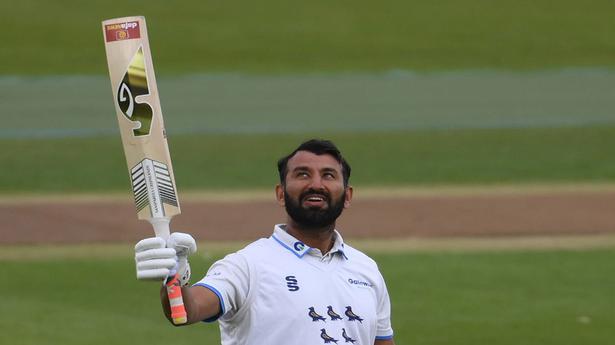 Pujara came out on top against Middlesex’s Shaheen Afridi, and completed 500 runs for the season in only four games

Pujara came out on top against Middlesex’s Shaheen Afridi, and completed 500 runs for the season in only four games

Cheteshwar Pujara continued his imperious form with a fourth successive hundred for Sussex against a quality Middlesex attack that had Pakistan international Shaheen Shah Afridi in its ranks.

Pujara, who has already scored two double-hundreds and a hundred, batted with an attacking intent, completing his three-figure mark in 133 balls with 13 boundaries and two sixes.

The first of his two sixes is the one he will remember as he slashed a short ball from Afridi over backward point for a six.

He also hit a boundary off Afridi and negotiated one of world’s premier pacer with ease, completing 500 runs for the season in only four games.

Pujara’s hundred came off off-spinner Mark Stoneman, whom he drove for three runs.

Pujara was very attacking throughout the innings and it only helped that the pitch at Sussex’s county ground at Hove was a flat one and with bright sunshine, there wasn’t much happening in the air or off the track.

Pujara added 138 for the third wicket with first innings centurion Tom Aslop (66 off 90 balls) and was severe on young medum pacer Blake Cullen.