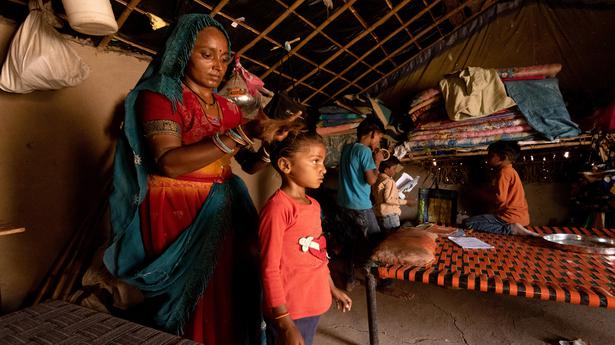 Around 800 Pakistani Hindus in Rajasthan, who came to India seeking citizenship on the basis of religious persecution, returned to the neighbouring country in 2021, according to Seemant Lok Sangathan (SLS), a group that advocates for the rights of Pakistani minority migrants in India. Many of them returned to Pakistan after they found that there had been no progress in their citizenship application.

“Once they return, they are used by Pakistani agencies to defame India. They are paraded before the media and made to say that they were ill-treated here,” Hindu Singh Sodha, president, SLS, said.

The Ministry of Home Affairs (MHA) initiated an online citizenship application process in 2018. It also made 16 Collectors in seven States accept online applications to grant citizenship to Hindus, Christians, Sikhs, Parsis, Jain and Buddhists from Pakistan, Afghanistan and Bangladesh.

In May 2021, the MHA empowered 13 more District Collectors in five States — Gujarat, Chhattisgarh, Rajasthan, Haryana and Punjab — to grant citizenship certificates to applicants belonging to the six communities under Section 5 (registration) and Section 6 (naturalisation) of Citizenship Act, 1955.

Though the entire process is online, the portal does not accept Pakistani passports that have expired, forcing people seeking refuge to rush to the Pakistan High Commission in Delhi to get their passports renewed for a hefty sum. “If it is a family of ten, then they end up spending more than ₹1 lakh at the Pakistan High Commission to get the passports renewed. These people come to India amid great financial hardships and to cough up such a high amount of money is not feasible,” Mr. Singh, who is based in Jodhpur, said.

According to Mr. Singh, other than applying online, applicants have to submit documents to Collectors in the physical mode, which is an added burden.

A Home Ministry official said they were examining the online system.

The MHA informed the Rajya Sabha on December 22, 2021 that according to the online module, as many as 10,635 applications for citizenship were pending with the Ministry as on December 14, of which 7,306 applicants were from Pakistan. According to Mr. Singh, there are 25,000 Pakistani Hindus in Rajasthan alone who have been awaiting citizenship, some for more than two decades. Many of them have applied in the offline mode.

In 2015, the MHA amended the Citizenship Rules and legalised the stay of foreign migrants belonging to six communities, who had entered India on or before December 2014 due to persecution on grounds of religion, by exempting them from the provisions of the Passport Act and the Foreigners Act as their passports had expired.

Persons seeking refuge in India either come on long-term visas (LTV) or pilgrim visas. LTVs, given for five years, are a precursor to citizenship.

The Congress-led United Progressive Alliance (UPA) government in 2011 decided to grant LTVs to hundreds of Hindus and Sikhs who came to India claiming religious persecution in Pakistan. Many came on pilgrim visas and continued to stay here after the expiry of their passports. According to MHA data, the number of LTVs granted to Pakistani Hindus from 2011-2014 stood at 14,726. Also according to MHA data, more than 600 LTVs have been granted to Pakistani Hindus from November 2021-February this year.

The government received altogether 8,244 applications for citizenship from the six minority communities from the three neighbouring countries in 2018, 2019, 2020 and 2021.

The Citizenship Amendment Act (CAA), 2019 intended to benefit undocumented (illegal) migrants from the six persecuted communities in the three neighbouring countries who entered India before December 31, 2014, is yet to come into force as the rules that govern the law have not been notified by the Ministry yet. The CAA could have helped legal minority migrants in fast-tracking their applications as it reduced the mandatory requirement of 11 years aggregate stay in India to five years to be eligible for citizenship, although many who await citizenship and arrived via the legal route have already spent more than 11 years in India.