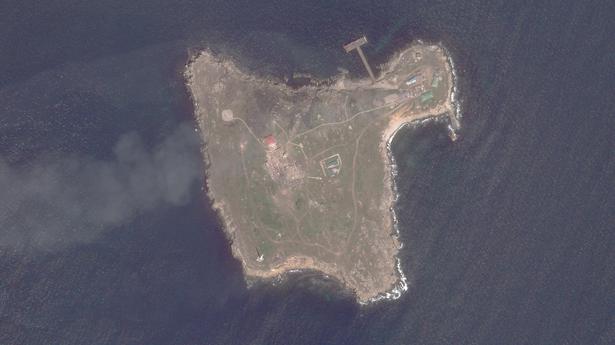 Kyiv said Saturday it has destroyed another Russian warship near the Black Sea’s Snake Island, where Ukrainian forces were awarded for heroism after rebuffing Russian demands to surrender.

Ukraine’s defence ministry said in a statement an armed drone had destroyed a Serna-class landing craft and an missile defence system at the small island under Russian control.

It released grainy over-head footage on social media showing in black and white what appeared to be an explosion over a light craft with debris spilling outwards.

“The traditional parade of the Russian Black Sea fleet on May 9 this year will be held near Snake Island — at the bottom of the sea,” the defence ministry added.

The military said in a separate statement on social media that the Bayraktar drone strike had also destroyed Tor-M2 anti-aircraft system being delivered to the island.

The outpost became a symbol of Ukrainian resistance after a radio exchange went viral at the start of the war, in which Ukrainian soldiers used an expletive in rebuffing a demand by the Russian warship Moskva to surrender.

The Moskva, sank in the Black Sea in mid-April following what Moscow said was an explosion on board. Ukraine and the U.S. said the warship was hit with missiles.