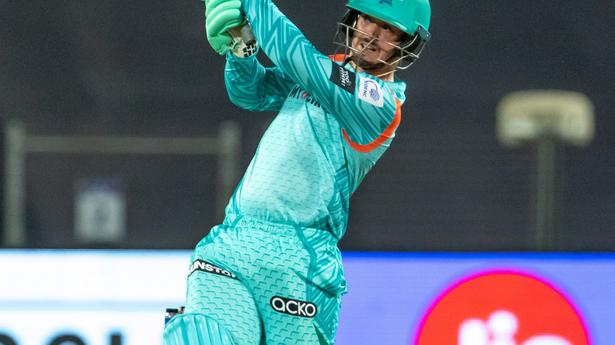 
Sunil Narine shone with the ball. Andre Russell was explosive with the bat. Still, its poor record in the PowerPlay continued to haunt Kolkata Knight Riders as it slid to a crushing defeat against Lucknow Super Giants in the IPL on Saturday.

The 75-run victory at the MCA Stadium propelled Super Giants to the top while Knight Riders suffered a big blow to its playoff hopes.

Entering the game with the worst batting PowerPlay record, Knight Riders would have hoped for its top-three to at least survive the first six overs in quest of a target of 177. But the batters wilted against Super Giants’ pace quartet.

Mohsin Khan, Dushmantha Chameera and Jason Holder were too hot to handle up front. Left-armer Mohsin started off with a wicket-maiden to set the tone. Chameera rattled Shreyas Iyer with the short-ball ploy and Holder adopted the same strategy to see the back of Aaron Finch to leave Knight Riders reeling at 25 for three at the end of the PowerPlay.

When Avesh Khan forced Nitish Rana to play onto the stumps in the next over, the game was all but sealed.

Russell on the attack

Then came the Russell assault, which gave the 17,000-strong crowd something to cheer about. But the West Indian’s five sixes — including three in a Holder over — were far from enough for Knight Riders.

And when a diving Holder caught a skier to send back Russell off Avesh in the 13th over, it was the final nail.

Earlier, Knight Riders tasted immediate success after choosing to bowl. Super Giants captain K.L. Rahul was run out without facing a ball in the opening over, courtesy a direct hit from Shreyas. But Quinton de Kock — guilty of sending Rahul back after calling for a quick single — didn’t let the incident affect him. Everything that was pitched short was dispatched in the arc between square-leg and mid-wicket, along the ground or over the fence.

At the other end, Deepak Hooda played some exquisite cover drives. Despite scoring just two in the opening over, Super Giants raced to 66 for one in six overs. Though Knight Riders pulled things back, conceding just 76 in the next 12 overs, Marcus Stoinis and Jason Holder smashed five sixes off Shivam Mavi in the 19th over to tilt the balance in Super Giants’ favour.

The Hindu Business Line23 mins ago
3