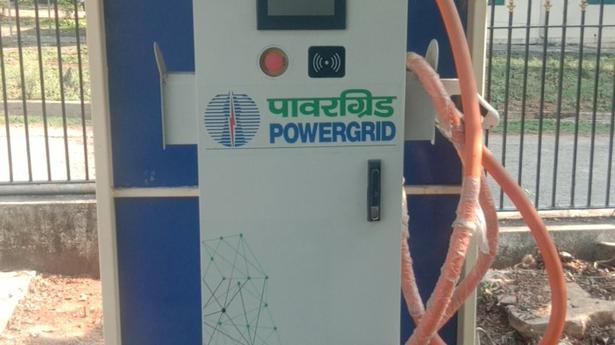 Minister for Energy and Kannada and Culture V Sunil Kumar announced that more than 1,000 Electric Vehicle Charging Stations (EVCS) would be set up across Karnataka in the coming months. A special drive will be launched in June by ESCOMs for pushing EV infrastructure in a big way.

“By June 30, we hope to establish maximum number of charging stations, as preparations for the same have begun with Karnataka committed to promote zero emission transport,” the Minister stated after inaugurating a national symposium on ‘Electric Vehicles and their charging technologies’, organised jointly by Chamundeshwari Electricity Supply Corporation Limited (CESC) and the KEB Engineers’ Association (KEBEA) at Kadakola near Mysuru.

Nearly 207 EV charging stations have been proposed in CESC’s limits covering five districts, and space for establishing the facilities has been identified. BESCOM, which is the nodal agency for EV charging technologies, will soon be giving its nod for floating tenders to the proposals from ESCOMs.

Claiming that Karnataka has been in the forefront of promoting EVs with the aim of cutting down carbon emissions, Mr Kumar said the EV network can help in minimising carbon footprint only when the necessary infrastructure, particularly charging stations, is in place. In this connection, an action plan has been prepared for expansion of the EV charging network, he explained.

The Minister has asked the ESCOMs to lay emphasis on the process of setting up EV charging stations across all district headquarters on priority with the focus on places of tourist importance.

Steps have been taken for establishing charging stations along National Highways and State Highways, and in all government offices to encourage green transport.

Mr Kumar said Mysuru has taken the lead in pushing EV infrastructure as CESC has set up another charging station for four-wheelers and two-wheelers on the premises of KEBEA in Mysuru.

“We can expect further growth in the EV sector only if the vehicles are made affordable to the people. Steps are necessary for making the EVs reasonable so that people can think of shifting from carbon emitting vehicles to zero emission vehicles,” he said.

Mr Sunil Kumar released a souvenir before inaugurating the EV charging station on KEBEA premises. Two EV four-wheelers, bought by the CESC for its office use in a bid to encourage zero emission transport, were charged at the new station.

In one of the technical sessions, KREDL Managing Director K P Rudrappaiah spoke about ‘Electric vehicle revolution – its charging, policies and promotion’. He spoke about the revised guidelines issued by the Union Ministry of Power on charging infrastructure for electric vehicles.

The guidelines include faster adoption of electric vehicles in India by ensuring safe, reliable, accessible and affordable charging infrastructure and ecosystem, besides affordable tariff chargeable from charging station operators and owners and electric vehicle owners. They cover employment generation and income opportunities for small entrepreneurs and preparedness of electrical distribution system for adoption of EV charging infrastructure.