HomeLifestyleFalooda for the Queen
Lifestyle

Falooda for the Queen 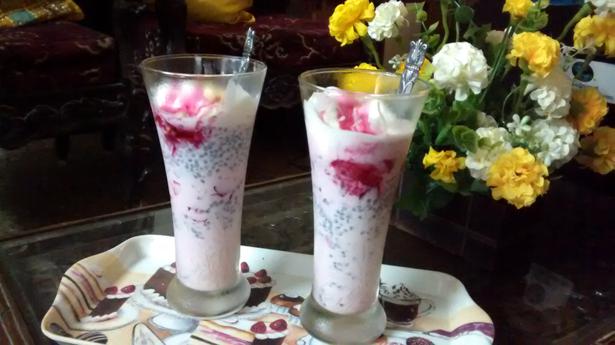 A rose falooda cake beat thousands of global entries to the final round of dessert hopefuls at Queen Elizabeth II’s jubilee celebrations in London. Here’s a look back at our tryst with the falooda

A rose falooda cake beat thousands of global entries to the final round of dessert hopefuls at Queen Elizabeth II’s jubilee celebrations in London. Here’s a look back at our tryst with the falooda

It’s going to be the battle of desserts at Queen Elizabeth II’s Jubilee. Five contestants have been shortlisted out of 5,000 entries from across the world, in a competition organized by Fortnum and Mason, the posh-nosh specialists in London.

“It should make people smile!” they advised contestants, “It should be joyous and celebratory.”

Among those top five, quivering with the gelatinous delight of the Indian sub-continent, is our very own falooda. It has been transformed into a rose falooda cake by the dexterous hands and imagination of Shabnam Russo. She has been described as a skincare expert who lives in North London, but Russo sounds more like a culinary Rushdie. She has taken her remembrance of faloodas past from the streets, the sands, the sidewalks of Mumbai and made it a dessert fit for a Queen.

Russo has added the essence of roses, which is a part of the falooda’s Persian legacy. Since the original recipe travelled across Central Asia into India, picking up almonds, pistachios and cut fruits en route, she would have happily improvised. Part of the recipe calls for the addition of other ingredients such as the traditional seviyan: strands of potato starch, rice, or flour, extruded through metal presses to create vermicelli that is served chilled like the fine threads of a mermaid’s hair. Note, all the ingredients are both local and natural.

One hopes that Buckingham Palace’s head chef, Mark Flannagan, who is one of the judges, will lead a chorus of “Ice, Ice, Your Majesty!”, for falooda is a Persian fantasy captured in a crystal goblet that has to be served semi-freddo in the midst of an Indian summer.

Persians had dedicated underground storage chambers for storing ice, either frozen fresh during their winters, or made by the addition of saltpetre, or potassium nitrate to freeze water. The technique is mentioned in I Allan Sealy’s The Trotter-nama, that compendium of delights, which includes the Nawabi culture that enabled the people of Nacklau, the city of Lucknow in his book, to enjoy the sherbets, or frozen fruit syrups, that have always been the specialty of the Persians who brought it to India via the steppes of Central Asia.

The best of the faloodas were from the Iranian city of Shiraz, always known for its original and inclusive food traditions. As though to remind us here in Chennai, we have our very own Nasrin Karimi, who runs the Shiraz Art Cafe on the East Coast Road highway at Akkarai and serves her version of the Shirazi sherbets in floral shaped glasses, calling them “guava slush”. She creates other variants flavoured with lime and fruit extracts of the season, and floating subja seeds, which we call holy basil, packed with crushed ice.

Nasrin also has portable plastic-lidded versions that you can carry home in the same way that in Mumbai people collect their plastic pouches filled with the falooda mixture, tied with rubber bands at the top and walk around with them, for all the world like holding miniature fish tanks in their hands. They sip this like infants being weaned of their mother’s milk, through straws that have been inserted through the rubber banded tops.

“Ah, Jafar’s,” people of a certain age might recall at this point. M Jafar and Co, established in 1938, was the ultimate ice-cream parlour that Madras enshrined in its hearts when there was no other. After Partition, as might be expected, some enterprising North Indian communities settled down in the South, bringing with them their grandmothers’ recipes for making ice creams and kulfis in cone-shaped metal containers.

The British, and after them the Parsis, had made sure that the ice that enterprising American entrepreneurs Frederic Tudor and Samuel Austin hacked out during winter from their frozen ponds and brought by ship to various Ice Houses in the major port cities of the sub-continent, would be used for the creation of frozen puddings and desserts. Jafar’s, near the Elphinstone Talkies and across the road from what was then the epicentre of Anna Salai known as the Round Tana, went one step further with creations that excited the imagination of the townspeople in ways that combined different flavours and ingredients.

They threw in names like “knickerbocker special” or “tutti-frutti or “banana split” or “pineapple passion”, at a time when a certain Elvis Presley was launching his career with immortal hits like ‘Love me tender’ and ‘Jailhouse blues’. These were moments to be treasured at Jafar’s, while eating the forbidden knickerbockers in the company of a suitable other who might sit on an adjacent bar stool, knees touching and slurping it “one by two” with a double straw.

Mumbai’s Badshah Cold Drink Depot just across from the Crawford Market made its reputation on the strength of its Royal Falooda. Here you find the essential ingredients in tall trumpet-flower shaped glasses. The glass noodles, the gelatinous sabja seeds floating like live frog spawn, the psychedelic effect of the different essences, jelly cubes and ice-cream floats are expertly layered to become works of art.

Next time Natasha Poonawalla decides to make an entrance at the New York Met Gala, she would be well advised to go dressed as a Badshah Falooda. They will even sprinkle in a few flakes of real gold leaf.

Until then, it is up to Her Majesty to declare June 5 2022 the day of the birth of the Jubilee Falooda Fantasy! As Covid cases rise, Saudi bans citizens from travel to India, 15 other countries