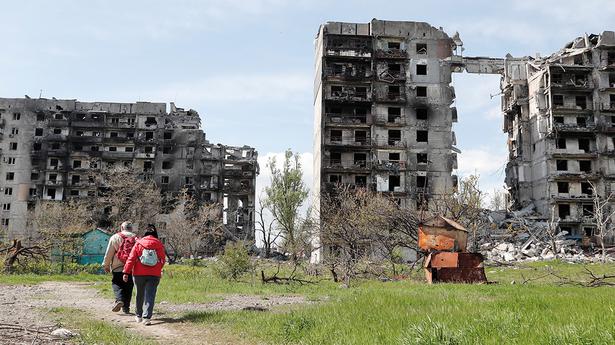 
The commander of the main defending force at the Azovstal steel mill in the strategic Ukrainian port city of Mariupol says Russian troops have broken into the territory of the mill, where limited evacuations of besieged civilians occurred last week.

Air raid sirens sounded in cities across Ukraine on Wednesday night and missile fire followed shortly after in the cities of Cherkasy, Dnipro and Zaporizhzhia.

The European Union’s chief executive is proposing that the bloc ban oil imports from Russia over its war on Ukraine, and target the country’s biggest bank and major broadcasters in a new round of sanctions.

Complaining that the West is “stuffing Ukraine with weapons,” Russia bombarded railroad stations and other supply-line targets across the country, as the European Union moved to further punish Moscow for the war Wednesday by proposing a ban on oil imports.

Heavy fighting also raged at the Azovstal steel mill in Mariupol that represented the last stronghold of Ukrainian resistance in the ruined southern port city, according to the mayor. A Russian official denied that Moscow’s troops were storming the plant, but the commander of the main Ukrainian military unit inside said Russian troops had broken into the mill’s territory.

The United States has provided intelligence that has helped Ukrainian forces kill many of the Russian generals who have died in the Ukraine war, the New York Times reported on Wednesday, citing senior U.S. officials.

Washington has provided to Ukraine details on Russia’s expected troop movements and the location and other details about Russia’s mobile military headquarters, and Ukraine has combined that help with its own intelligence to conduct artillery strikes and other attacks that have killed Russian officers, the newspaper said.

The Pentagon and the White House did not immediately respond to Reuters’ requests for comment on the report.- Reuters

Civilians including women and children are still trapped inside Ukraine’s besieged city of Mariupol and a prolonged ceasefire is needed to ensure their evacuation as Russia presses its assault, Ukrainian President Volodymyr Zelenskiy said on Thursday.

After failing to capture the capital Kyiv in the early weeks of a war that has killed thousands and flattened cities, Russia has accelerated attacks on Ukraine’s east and south, where the Azov Sea port of Mariupol is among its main targets.

Russia declared victory over Mariupol on April 21 after weeks of siege and shelling. The city is key to Moscow’s efforts to cut Ukraine off from the Black Sea – vital for grain and metals exports – and link Russian-controlled territory.- Reuters

UN: More than 300 evacuated from Mariupol

The United Nations says more than 300 civilians from the besieged southeastern city of Mariupol and four other towns have been evacuated to Ukrainian-held Zaporizhzhia in a second successful operation to get civilians out of areas subject to Russian shelling and attacks.

Osnat Lubrani, the U.N. humanitarian chief in Ukraine, said in a statement that many of the civilians from Mariupol, Manhush, Berdiansk, Tokmak and Vasylivka came Wednesday with nothing but the clothes they were wearing and are now getting humanitarian assistance. She said they’ll also receive “much- needed psychological support.”

Ukrainian President Volodymyr Zelenskyy said the 344 evacuated Wednesday are in addition to the more than 150 people who were evacuated earlier this week from the bunkers under the Azovstal steel mill in Mariupol, which is surrounded by Russian troops and reportedly came under renewed fire on Wednesday.- AP

“Attempts to storm the plant continue for the second day. Russian troops are already on the territory of Azovstal,” RFE/RL quoted Arakhamia as saying, adding that as of Wednesday evening contact remained between Ukraine’s government and the Ukrainian fighters in the plant.

Russian forces pounded targets across Ukraine, taking aim at supply lines for foreign weapons in the west and intensifying an offensive in the east, as the European Union moved Wednesday to further punish Moscow for the war with a proposed ban on oil imports.

The EU proposed its toughest sanctions yet against Russia on Wednesday, including a phased oil embargo, as Ukraine came under further heavy Russian bombardment and nervously monitored large-scale army drills in neighbouring Belarus, a close Moscow ally.

Piling pressure on Russia’s already battered $1.8 trillion economy, the European Commission proposed phasing out supplies of Russian crude oil within six months and refined products by the end of 2022.