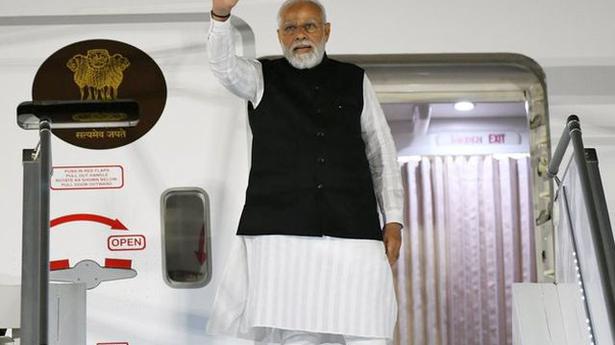 Prime Minister Narendra Modi left for home on Thursday, May 5, 2022, after concluding his three-nation European tour during which he held a series of bilateral meetings to boost ties in a range of areas including trade, energy and green technology.

The United States Federal Reserve intensified its fight against the country’s worst inflation in 40 years by raising its benchmark short-term interest rate by a half-percentage point Wednesday — its most aggressive move since 2000 — and signalling further large rate hikes to come.

COVID-19 is not over and the virus is constantly changing shape. There is an uptick in some pockets of the country, according to Dr. V.K. Paul, member (health), NITI Aayog.

LIC’s public offer, the country’s biggest-ever IPO, saw the policyholders’ portion being oversubscribed on the first day itself on Wednesday, though overall subscription stood at just 66%.

Making an unscheduled announcement, RBI Governor Shaktikanta Das said the Monetary Policy Committee (MPC) of the RBI met in an off-cycle meet and decided to increase the policy rates to curb the rising inflation.

Key indices crashed 2.29% in reaction to the development. The last time the repo rate was increased was in August, 2018. This time around, the market was not prepared for an off-cycle announcement.

The family of a 13-year-old girl in Uttar Pradesh’s Lalitpur has alleged she was raped by a police station in-charge after she had gone there to register a complaint about a gang rape case.

His statement at the 61 st annual conference of the Bodo Sahitya Sabha (BSS) in western Assam’s Tamulpur attains significance after the row in the northeast over the Centre’s bid to make Hindi compulsory in high schools across the region.

Stir to continue against ‘azaan’ on loudspeakers, says Raj Thackeray

Even as the police served notices to workers of the Maharashtra Navnirman Sena (MNS), its chief Raj Thackeray on Wednesday said the movement to shut down loudspeakers on mosques was not a one-day affair but would continue.

The incident that occurred on Tuesday was the second involving a Max plane of the SpiceJet in the last five months.

What are the methods through which the cyber-crime group attacks companies? Has any action been taken against the masterminds of the group?

Sri Lanka’s usable foreign reserves are down to $50 million, as the cash-strapped island awaits assistance from the International Monetary Fund, which might take up to six months to come through, Finance Minister Ali Sabry said on Wednesday.

The Centre’s wheat procurement is set to decline by more than half to 19.5 million tonnes in the the current rabi marketing year amid higher exports and likely fall in output, food secretary Sudhanshu Pandey said on Wednesday, and asserted there won’t be any concern for meeting the domestic demand under the Public Distribution System.

With the win RCB moved to fourth position on the points table, while CSK were pushed closer to the brink of elimination as they remained at the penultimate spot.