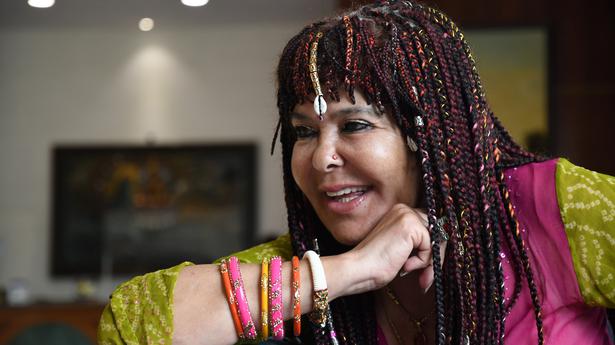 
What strikes you most when you meet the enigmatic Leila Haddad are those intricate braids cascading down her shoulders, and ornamented with shiny threads and metal rings. A single cowrie shell hangs from one of the braids at the centre of her forehead. Clad in a pink and yellow blouse and a fuschia skirt, with a sheer red scarf wrapped around her waist, Leila looks as colourful and free-spirited as the Ghawazee (nomadic musicians and dancers from Egypt).

She takes umbrage at being called a ‘belly dancer’. Leila corrects me and says that she is an exponent of ‘raqs al-sharqi’, an Arabic dance form, which when translated in English means ‘oriental dance’. And she is called the ‘high priestess of oriental dance’. This petite Tunisian-Eqyptian dancer, who at the age of 73, can still shimmy up a storm and who now calls Paris her home, was recently in Madurai to explore the dances of South India. Leila spoke about her artistic journey that has helped her bring into the limelight a dance form that was relegated to the cabarets.

What spurred you to revive and refine the art form?

n “I won’t say that I learnt this art form. It is there in our culture. In almost all Arab-Berber villages, the women dance when they come together. It acts as therapy for us. Before Christianity and Islam came into the region, we were nomadic in nature travelling along the River Nile. And on the way, we incorporated various dance forms especially from North Africa, and with goddess Ishtar being the main female deity, the high priestess in the temples would perform this dance. This dance for me is more than an art, it is a sacred rite. But with Christianity and puritanism making inroads, this was seen as a pagan art form and slowly relegated to the sidelines. In the late 18th century, this art slowly found its way into bordellos and with it even the name changed. From ‘raqs el sharqi’ it became belly dance. When rock and roll, and jazz still retain their names, why change the name of this art form. The colonisers did not show any respect to even the terminology. They negated its spiritual identity and focused only on its sexual aspect. For the westerners, we are all exotic and they distorted our culture and this is what I wanted to change.

You never started out as a dancer, when and how did this transformation take place?

n During my student days, when I was in England, I was influenced by the African National Congress movement. The anti-apartheid unrest touched me and the only way I could show my protest was by joining the Zulu theatre. If I was silent, I knew it meant that I was colluding with those perpetrating the injustice. So I had to talk. Being a woman in the West and an Arab-Berber, I had to be seen to be heard. And theatre was the only place where I could express my anger in a very democratic manner. I am a solo dancer but I had to utilise the space given to me on the stage, so I turned choreographer and according to the piece, I choose the number of dancers. Space to me is esoteric and I am keen to invoke its energy and spiritual meaning. When I utilise the sacred geometry of the space, it gives more power to my performance and thoughts. Even the prop of a light for me is part of the theatre and a way to interpret my message. So I opened up the theatre for the dance of the orient.

So is political activism an integral part of your performances?

n Yes, as an Arab in an European world, I know what it means to face discrimination. Hence, I empathise with the struggles of Afro-Americans. Maya Angelou has influenced me a lot, and I have choreographed a dance where she recites a poem in her own voice. The Civil Rights movement, right from Martin Luthur, to Rosa Parks to Obama all have been a part of my dance repertoire. As a writer, I have written pieces and performed on it. And yes, I am feminine and a feminist. I celebrate womanhood through my dance. Of late, I can see a wave towards the far right in many countries. This is scary and we have to be vigilant. We may lose in one instance what people like Simone de Beauvoir had got for us. As a woman I have many layers, I am a mother, a daughter, a lover, and a wife. The dancer in me helps me reveal these various layers . I have to speak about my rights and the injustice being done. The day I won’t talk about this is when I am dead.

What you hope to take back from this trip to India?

n India is not new to me. I have been a frequent visitor and the folk dancers of Rajasthan, especially the Kalbeliyas have inspired me. Maybe the fact that they are also nomads helped me understand their art form. I find many similarities between the two dance forms. I have been bringing my students and making them understand that there are so many varied dance forms and we should be open to assimilating them. This is my first trip to South India and I want to see Bharatanatyam, Kathakali, and other dance forms that are unique here. I also want to understand the culture and tradition behind these art forms. I don’t know Tamil or Malayalam but I can communicate through my dance. Dance being a common language, I know people will understand what I strive for. If I write a play, then I am limited by the language, but through dance I can reach out to all human beings.

The Hindu16 seconds ago
News

The Hindu16 seconds ago
2
News