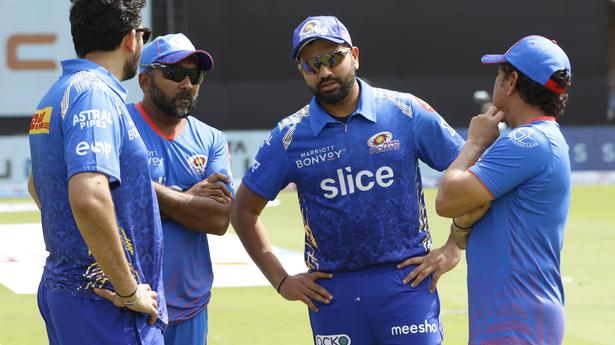 Mumbai Indians (MI) head coach Mahela Jayawardene on May 5 admitted that “lack of execution” in close games during this Indian Premier League (IPL) season has been due to the poor “structuring” of the line-up, putting them at the bottom of the 10-team table.

Mumbai Indians are already out of the IPL having lost eight games on the bounce before logging home their first points. But more importantly, the critics have been vindicated about five-time champions’ poor auction strategy.

The mediocre bunch of domestic players like Basil Thampi, Jaydev Unadkat, Murugan Ashwin along with purely sentimental retentions like Kieron Pollard and an insane bid of ₹15.25 crore for Ishan Kishan have all contributed to MI’s downfall.

“For a team to work, it is not about just one individual, it is about a team executing a game plan. The way we have structured our line-up this season is something we have lacked,” Jayawardene said when asked about Rohit Sharma’s poor run of form in the nine games.

“At the same time, we have not had those finishers at the back-end,” the head coach added.

“It is about getting most of your guys playing good cricket on [in] a game and having that consistency going through. That is something we have lacked,” Jayawardene said ahead of their game against Gujarat Titans.

Not closing out games has been one of MI’s banes this season.

“And at the same time we have lacked consistency and we need main batters to be consistent and getting those runs. It is not just one individual, it is about a collective group and we haven’t been consistent all around,” the head coach added.

‘Rohit’s form has been a disappointment’

Asked if Rohit’s form was the reason why Mumbai Indians aren’t able to post high totals, Jayawardene replied: “Let me answer that in a much fairer way. Yes, as you rightly said Ro [Rohit’s nickname] has been brilliant in batting for long periods, getting those big scores consistently and the rest of the guys have batted around him.”

“He [Rohit] knows he had starts and hasn’t been able to convert them into big scores and that has been a disappointment,” he quipped.

“You can say he hasn’t picked up wickets but teams play the entire bowling unit and not just one bowler. So they [opposition] have covered Bumrah and made sure that they don’t take too many risks against Booms. Therefore he hasn’t been able to create opportunities,” he said.

According to Jayawardene, Mumbai in at least four to five games has had two such overs where they have given away 20 extra runs which have proved to be decisive.

“It is one of those seasons where we haven’t been able to control the situations. If you take four-five games, where we have bowled brilliantly for 18 overs and we’ve had two big overs.

“One 20-run over pretty much in every game and that has cost us at least four to five games,” he signed off.