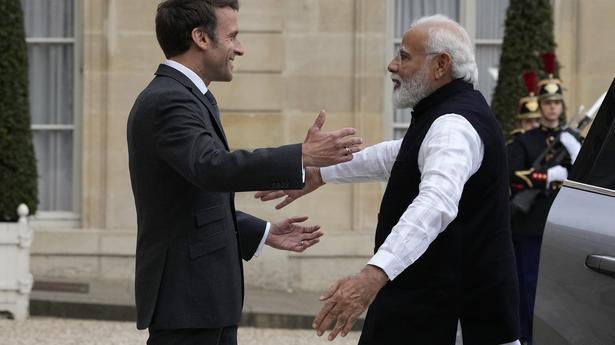 Prime Minister Narendra Modi met French President Emmanuel Macron in Paris on Wednesday and discussed issues of bilateral and mutual interests as well as regional and global developments, amid Russia’s aggression against Ukraine.

“PM @narendramodi and President @EmmanuelMacron meet in Paris. This meeting will add momentum to the India-France friendship,” the Prime Minister’s Office tweeted along with a photograph of Mr. Modi and Mr. Macron hugging each other.

Mr. Macron held a tete-a-tete with Mr. Modi before the delegation-level talks at the Elysee Palace — the official residence of the French President.

“A meeting between two friends. An opportunity to translate the renewed mandate of President @EmmanuelMacron into a renewed momentum for the India-France Strategic partnership,” Ministry of External Affairs spokesperson Arindam Bagchi tweeted.

Mr. Modi, who arrived in Paris from Denmark on the final leg of his three-nation Europe tour, will hold extensive talks with Mr. Macron, who was re-elected to the top post over a week ago.

His visit comes amid the Ukraine crisis, which has united much of Europe against Russia.

The two leaders are also expected to discuss how to ensure cessation of hostilities in Ukraine and mitigate the global economic consequences of this conflict.

On Tuesday, Mr. Macron spoke with his Russian counterpart Vladimir Putin and urged Moscow to rise to the level of its responsibility as a permanent member of the UN Security Council by ending this devastating aggression, an Elysee statement said.

The Ukraine issue also figured prominently at the second India-Nordic summit attended by Prime Minister Modi and his counterparts from Finland, Iceland, Sweden, Norway and Denmark in Copenhagen on Wednesday.

Mr. Modi has said that India believes no country would emerge victorious in the Russia-Ukraine war as all will suffer losses and there will be a “more serious” impact on developing and poor countries.

Another focus area of the talks would be to unitedly deal with the challenges in the Indo-Pacific, amid China flexing muscles in the region.

Soon after his arrival here, Mr. Modi in a tweet described France as one of India’s strongest partners, with both countries cooperating in diverse areas.

Diplomatic sources said Mr. Modi’s meeting with Mr. Macron days after his election victory is highly symbolic. It sends a powerful signal that the two leaders want to make the Indo-French partnership a guiding principle of their foreign policy for the years to come, they said.

It is also a demonstration of the level of personal chemistry between the two leaders, which gives impetus to our joint actions across all fields of cooperation, they said.

His visit comes during the French presidency of the European Union. It also coincides with the 75 years of diplomatic relations between India and France.

India and France, which are strategic partners since 1998, have a multifaceted partnership across the spectrum in defence, civil nuclear, economy, space and maritime security, clean energy and environment, counter-terrorism, people-to-people ties.

India and France are founding members of the International Solar Alliance announced by Prime Minister Modi at UN Climate Change COP21 in November 2015.

Both the countries enjoy a robust economic partnership with a bilateral trade of $7.86 billion (2020-21) and cumulative Foreign Direct Investment (FDI) of $9.83 billion since April 2000.

Over a 1,000 French businesses are present in India across sectors such as defence, IT, consulting, engineering services and heavy industries. Over 150 Indian companies in France employ more than 7,000 people.

A thriving Indian diaspora in France deepens the cultural connect between both countries.

In a statement before leaving for Europe, Mr. Modi had said: “President Macron has very recently been re-elected, and my visit just 10 days after the result will not only allow me to convey my congratulations in-person, but also reaffirm the close friendship between the two countries. This will also give us the opportunity to set the tone of the next phase of the India-France Strategic Partnership.”

“President Macron and I will share assessments on various regional and global issues and will take stock of ongoing bilateral cooperation. It is my firm belief that two countries that share such similar vision and values for the global order, must work in close cooperation with each other,” he had said.

On the sidelines of the summit, Mr. Modi held separate bilateral meetings with his counterparts from Norway, Sweden, Iceland and Finland.