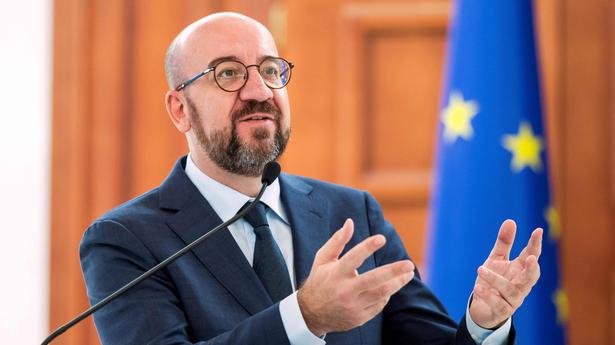 “This year we plan to significantly increase our support to Moldova by providing its armed forces with additional military equipment,” European Council President Charles Michel said

“This year we plan to significantly increase our support to Moldova by providing its armed forces with additional military equipment,” European Council President Charles Michel said

European Council President Charles Michel on May 4 pledged to increase EU military aid to Moldova, Ukraine’s neighbour that has seen a series of attacks in a pro-Moscow separatist region.

“This year we plan to significantly increase our support to Moldova by providing its armed forces with additional military equipment,” Mr. Michel told a press conference with Moldova’s President Maia Sandu during a visit to the country.

Mr. Michel said the EU will up support in the “field of logistics, of cyber defence” and will seek to provide “more military-building capacities” to Moldova, without going into further detail.

“The EU stands in full solidarity with you, with Moldova. It is our European duty to help and to support your country,” Mr. Michel said, adding that the bloc will help Moldova “cope with the consequences of the spillover from the Russian aggression in Ukraine“.

“We will continue to deepen our partnership with you to bring your country closer to the EU,” Mr. Michel said. Speaking at the press conference, Ms. Sandu said that while Moldova has plans in place for “pessimistic scenarios… we see no imminent risk right now”.

She added that the incidents in Transnistria were “generated by the pro-war forces” there and “we try to discourage such incidents”. Ms. Sandu also reaffirmed Moldova’s intention to become a member of the European Union, after it submitted an application on March 3.

“We chose European integration as our model of development. The danger and uncertainty of the war next door showed us that we must defend our choice and make firm steps towards our chosen path,” Ms. Sandu said.

Last week, Moldova’s separatist region of Transnistria reported explosions hitting the Security Ministry, a military unit and a Russian-owned radio tower as well as shots fired at a village housing a Russian arms depot, which Moscow called “acts of terrorism”.

The self-proclaimed republic of Transnistria bordering Ukraine seceded from Moldova in 1992 after a brief war with Chisinau. Around 1,500 Russian soldiers have been based there ever since.

Fears of a spillover from the Ukraine conflict grew after a Russian general said the Kremlin’s military campaign — launched on February 24 — aimed to create a land corridor through southern Ukraine to Transnistria. Kyiv has accused Russia of wanting to destabilise the region to create a pretext for a military intervention.