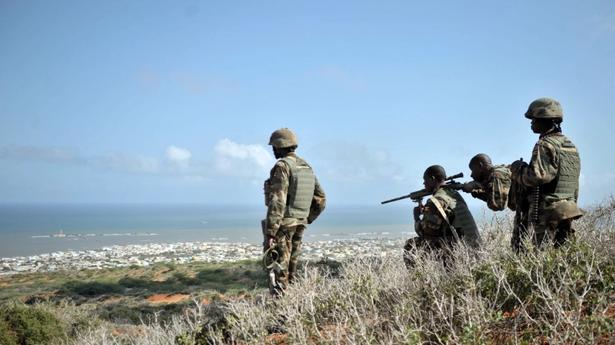 Al-Shabaab, which has been waging a deadly insurgency against Somalia’s fragile central government for more than a decade, issued a statement claiming responsibility for the assault

Al-Shabaab, which has been waging a deadly insurgency against Somalia’s fragile central government for more than a decade, issued a statement claiming responsibility for the assault

Heavily armed Al-Shabaab jihadists stormed an African Union (AU) base in Somalia on Tuesday, triggering a fierce firefight that caused an unknown number of casualties, a local military commander and witnesses said.

AU forces dispatched helicopter gunships after the pre-dawn car bomb and gun attack on a camp housing Burundian peacekeepers near Ceel Baraf, a village about 160 kilometres northeast of the capital Mogadishu, the sources said.

“There was heavy fighting and casualties inflicted on both sides, but we don’t have more details about this incident so far,” local military commander Mohamed Ali said.

“They launched the attack with a car bomb blast before a heavy exchange of gunfire broke out,” he added.

Al-Shabaab, which has been waging a deadly insurgency against Somalia’s fragile central government for more than a decade, issued a statement claiming responsibility for the assault.

The jihadists said they had taken control of the camp killing 59 African Union soldiers and injuring dozens more.

The claim could not be verified and there was no immediate comment from the AU Transition Mission in Somalia (ATMIS) or central government officials.

“The helicopters fired missiles and heavy machineguns, we saw smoke rising over the camp but we don’t know about the situation exactly,” said another witness, Ahmed Adan.

In September 2015, at least 50 African Union troops were reported by Western military sources to have been killed when Al-Shabaab fighters overran a military base in Janale, southwest of Mogadishu.

In October 2011, Al-Shabaab claimed to have killed more than 70 Burundian peacekeepers in battle and laid out dozens of bodies in military uniform in one of their strongholds outside Mogadishu.

At the time the African Union said it had lost about 10 soldiers, and dismissed the militants’ claims as a stunt.

ATMIS replaced the previous AMISOM peacekeeping force when its mandate expired at the end of March. The new mission has the task of helping Somali forces take primary responsibility for security in the troubled Horn of Africa nation.

Under a UN resolution, ATMIS is projected to gradually reduce staffing levels from nearly 20,000 soldiers, police and civilians to zero by the end of 2024.

Al-Shabaab fighters controlled Mogadishu until 2011 when they were pushed out by the AU force.

But they still hold territory in the countryside and frequently attack civilian, military and government targets in Mogadishu and outside.

The latest assault comes less than a week after Parliament chose new Speakers for the upper and lower houses — a key step on the path towards a long-delayed presidential vote.

The drawn-out election process has been marred by deadly violence and a bitter power struggle between the president and prime minister.

Somalia’s international partners have voiced fears the delays were distracting from its myriad problems including the fight against Al-Shabaab and the rising threat of famine in many parts of the country.