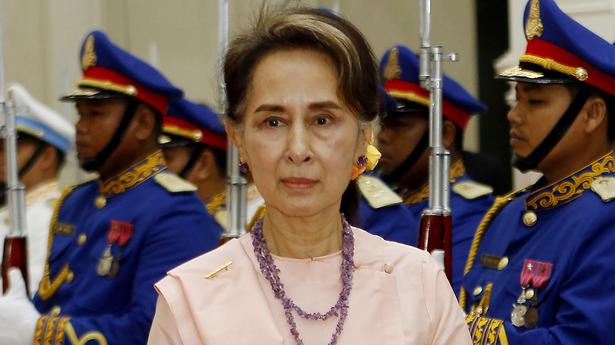 Ousted Myanmar leader Aung San Suu Kyi went on trial on Monday in a new corruption case against her, alleging she took $550,000 in bribes from a construction magnate.

She is charged with two counts under the country’s the Anti-Corruption Act, with each count punishable by up to 15 years in prison and a fine.

Ms. Suu Kyi has been detained since the army ousted her elected government in February 2021 and has not been seen or allowed to speak in public since then.

She is being tried in closed sessions and her lawyers cannot speak publicly on her behalf or about her trial because of a gag order placed on them.

She has already been sentenced to 11 years’ imprisonment after being convicted of illegally importing and possessing walkie-talkies, violating coronavirus restrictions, sedition and another corruption charge.

Ms. Suu Kyi’s supporters and human rights groups have said the cases against her are an attempt to discredit her and legitimise the military’s seizure of power, eliminating the possibility of her taking part in a possible 2023 election.

But widespread resistance to the army’s takeover has resulted in what some UN experts have characterised as a civil war, challenging the military’s ability to govern.

Monday’s opening of Ms. Suu Kyi’ latest trial was confirmed by a legal official, who spoke on condition of anonymity because he was not authorised to release information.

In this latest case, she is accused of receiving money in 2019 and 2020 from Maung Weik, a tycoon who previously was convicted of drug trafficking.

State television under control of the military government last year showed a video in which Maung Weik claimed to have given cash payoffs to government ministers to help his businesses.

Ye Htet, an official from the Anti-Corruption Commission who is a plaintiff in the case, gave testimony in Monday’s proceedings, said the legal official, who said payments Maung Weik made in 2019 and 2020 were being treated as separate counts.

The Global New Light of Myanmar, a state-controlled newspaper, reported in February the official charges that Ms. Suu Kyi in her position as state counsellor — the country’s de facto chief executive — received ₹550,000 in four instalments in 2019-2020 “to facilitate the business activities of a private entrepreneur.” Maung Weik in his statements in state media last year said he gave the money from 2018 to 2020. He said in his video that the money included ₹100,000 provided to Ms. Suu Kyi in 2018 for a charitable foundation named after her mother and also gave Mr. Suu Kyi USD 450,000 in payments from 2019 to 2020 for purposes he did not specify.

Maung Weik, as chairman of a property development company, was close to some of the generals in power during a previous military-run government. He was sentenced to 15 years in prison in 2008 for drug trafficking and was released in 2014 under a semi-democratic transitional government led by former generals. After his release, he returned to doing business with former generals.

Overall, Suu Kyi has been charged with 12 counts of corruption. She was convicted last week on one corruption charge and given a five-year prison sentence after being found guilty of receiving USD 600,000 and seven gold bars from Phyo Min Thein, the former chief minister of Yangon, the country’s biggest city.

Her lawyers are trying to overturn the verdict in an appeal to the Supreme Court on technical grounds, saying the case should not have been heard. If that is rejected, they can still make another appeal.