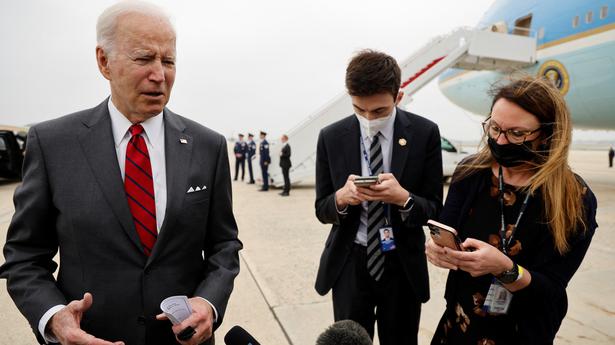 President Joe Biden called on American voters on Tuesday to defend the “fundamental” right to abortion after a leaked draft suggested that the Supreme Court is poised to strike down the long-standing decision protecting a woman’s right to terminate a pregnancy.

The opinion by the conservative majority in the court hit Washington like a thunderclap late on Monday, setting up a potentially historic turning point on a hot-button issue that is now certain to dominate the midterm elections in November.

If the draft is made official —which could happen within months — it would shred half a century of constitutional protections for abortion rights, and give free rein to Republican-controlled States which are already leading an all-out push to curtail the procedure.

The Democrats stand broadly united in support of abortion rights, and rallied immediately in defence of the watershed 1973 Roe v. Wade decision.

While he cautioned that the draft had not been verified, Mr. Biden said U.S. voters would have to step up in defence of the right if the Supreme Court moved ahead.

“I believe that a woman’s right to choose is fundamental, Roe has been the law of the land for almost fifty years, and basic fairness and the stability of our law demand that it not be overturned,” the U.S. leader, a Democrat, said in a statement.

If the draft proves authentic, “it will fall on voters to elect” officials who back abortion rights in the coming midterm elections, he said, vowing to work to pass legislation in Congress that codifies Roe v. Wade.

Crowds of protesters from both camps descended on the Supreme Court building in Washington in the wake of Monday’s leak.

In Roe v. Wade, the nation’s highest court held that access to abortion is a constitutional right.

In a subsequent 1992 ruling, Planned Parenthood v. Casey, the court guaranteed a woman’s right to an abortion until the foetus is viable outside the womb, which is typically around 22 to 24 weeks of gestation.

Most developed countries allow abortions on request up to a gestational limit, most often 12 weeks.

Roe v. Wade makes the United States one of a handful of nations to allow the procedure without restriction beyond 20 weeks of pregnancy — although many others allow it past that point for specific reasons.

Reproductive rights have been under attack in many parts of the United States as Republican-led States move to tighten restrictions, with some seeking to ban all abortions after six weeks, before many women know they are pregnant.

In December, hearing oral arguments about a Mississippi law that would ban most abortions after 15 weeks, the Supreme Court appeared inclined to not only uphold that law but to toss out Roe v. Wade.

Overturning the ruling would spell a massive victory for generations of Republicans who have fought tooth and nail to curb abortion rights, and would effectively leave the nation’s 50 individual States to determine whether to protect or outlaw the procedure.

Striking it down “would be an answer to prayer,” House Republican Jackie Walorski tweeted following news of the leak.

The draft opinion was written by Justice Samuel Alito and according to news outlet Politico has been circulating since February inside the court — dominated 6-3 by conservatives following the nomination of three Justices by former President Donald Trump.

Politico stressed the document it obtained is a draft and Justices do sometimes change their votes before a final ruling.

Such a leak while a case is still pending is an extraordinary breach of Supreme Court custom, and Republicans have demanded an investigation into how the draft was made public.

“We hold that Roe and Casey must be overruled,” Justice Alito writes in the document, labelled as the “Opinion of the Court” and published on Politico’s website.

“It is time to heed the Constitution and return the issue of abortion to the people’s elected representatives.”

The Guttmacher Institute, a pro-choice research group, has said 26 States are “certain or likely” to ban abortion if Roe v. Wade is overturned.

The Hindu30 seconds ago
2