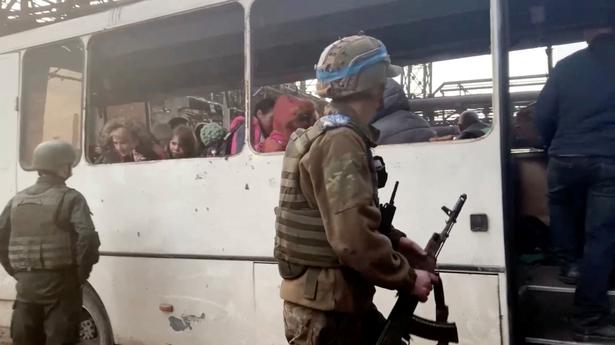 
Russian forces resumed shelling of a steel plant in the war-torn city of Mariupol immediately after the partial evacuation of civilians, a Ukrainian military officer has said.

Ukrainian National Guard brigade commander Denys Shlega said on Sunday in a televised interview that at least one more round of evacuations is needed to clear civilians from the Azovstal steel mill and dozens of small children are inside bunkers below the industrial facilities.

The shelling began as soon as rescue crews ceased evacuating civilians from the plant, Shlega said.

The commander estimated that several hundred civilians still are trapped at the site alongside nearly 500 wounded soldiers and numerous dead bodies. The plant is the only part of the city not occupied by the Russians.

A video published earlier on Sunday by the Russian Defence Ministry showed people walking out of the steel plant, including a small group of women accompanied by two pet dogs.