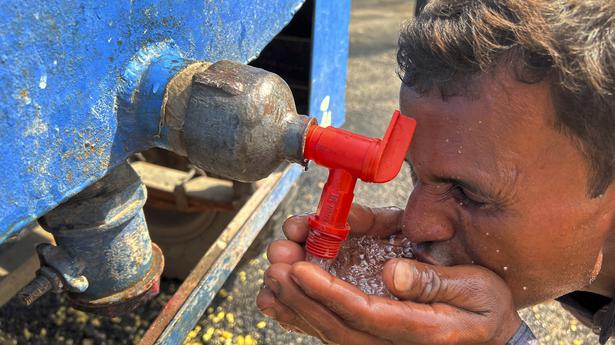 
Moon not sighted, Eid-ul-Fitr to be celebrated on May 3

Eid-ul-Fitr, which marks the culmination of the fasting month of Ramzan, will be celebrated in the country on Tuesday as the moon was not sighted on Sunday evening.

Ministry asks health facilities to be ready for soaring temperatures

The tenures of three high profile offices — the Union Home Secretary; Director, Intelligence Bureau (IB); and Secretary, Research and Analysis Wing (R&AW) — are ending in the next few months, with suspense over whether the present incumbents will continue at the posts or new faces will replace them. Since Independence, none of these offices have been occupied by a woman.

The Central Bureau of Investigation (CBI) has booked Educomp Solutions Limited (ESL) and others for allegedly cheating Jammu & Kashmir Bank of ₹360.30 crore. The agency had earlier booked the related entities in two other bank fraud cases involving over ₹2,761 crore.

Will strengthen cooperation with our European partners, says Modi

Welfare of the Indian diaspora, the crisis in Ukraine and renewable energy are expected to be in focus during the three-nation Europe tour of Prime Minister Narendra Modi that starts on May 2. In a pre-departure press statement, Mr. Modi said his visit would strengthen the spirit of cooperation between India and the European countries.

Muslim disenchantment with SP comes to surface after defeat in 2022 U.P. election

The recent politics over jailed senior Samajwadi Party (SP) leader Azam Khan and the expression of discontent by his supporters as well as other Muslim leaders in Uttar Pradesh have brought to fore the simmering frustration within the minority community with the non-BJP parties, in particular the Akhilesh Yadav-led SP.

The Punjab police on Sunday arrested nine persons, including the key conspirator Barjinder Singh Parwana, in connection with the ‘anti-Khalistan’ clash between different groups in Patiala.

Time may be running out for a petition filed in the Supreme Court challenging the Centre’s decision to appoint a Delimitation Commission headed by former apex court judge, Justice Ranjana Prakash Desai, to redraw Lok Sabha and Assembly constituencies in Jammu and Kashmir following the abrogation of Article 370 and the bifurcation of the former State.

Pakistan’s state-run PTV has suspended 17 officials for failing to ensure “proper” coverage of Prime Minister Shehbaz Sharif’s Lahore visit due to the non-availability of an advanced laptop.

Sri Lanka’s beleaguered President Gotabaya Rajapaksa on Sunday urged all political parties to set aside their differences and appealed to the protesting citizens to join hands to steer a “pro-people struggle”, amidst growing demands for his government’s immediate resignation over its failure to tackle the country’s worst economic crisis.

The agreement was signed on February 18 between the two sides. Coinciding with the important occasion, Secretary, Department of Commerce, B.V.R. Subrahmanyam flagged off the first consignment of goods consisting of jewellery items from India to the UAE under the India-UAE CEPA at an event held at the New Customs House in New Delhi.

The Congress on Sunday raised questions over the deal to sale Centre’s 51% stake in helicopter services provider Pawan Hans Ltd (PHL), asking why the government did not explore merging the firm with ONGC instead of deciding to hand it over to a consortium that is just six-months-old.

The win, which coincided with M.S. Dhoni’s return to captaincy, kept CSK afloat for an improbable play-off berth as they now have six points with five matches remaining, while SRH remained in the fourth position with 10 points in the overall standing.