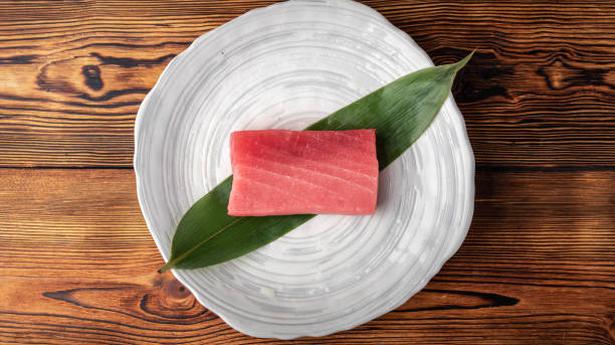 The whopping $145,000 paid for 211 kilograms of bluefin tuna at the first Tuna auction of 2022 in Tokyo, may have no immediate impact on M Muthu Vel in Puducherry, or his bank account. But, he uses the news to inspire fishermen in his area to land good quality tuna. “See: It can fetch record prices,” he says.

Since 2018, fisherman-turned-entrepreneur Muthu Vel has been training a group of around 150 fisherfolk to handle the fish, prized by Japanese chefs, to improve the quality of what is brought to shore. “The quality of Tuna which lands in India is poor. That’s because our fishermen are not trained in handling the fish, their small boats are ill equipped and do not have the wherewithal to keep the catch fresh,” says Abdus Samad, Principal Scientist, CMFRI in Kochi.

In 2015, Muthu Vel opened Aurofish, in Muthiyalpet, Puducherry, along with his wife Anitha, which offers fresh seafood. He introduced Saku Block, the premium tuna used for Sushi, in November 2021 and was feted for this by the Ministry of Fisheries, Government of India, in the Best Innovation/ Infusion Technology category. Muthu Vel has since joined online auctions to get the best price, (₹1,250 for 500 gm) for his quality Saku Block.

India is one of the largest producers of yellow-fin tuna, with an annual catch ranging from 32,000 to 35,000 tons. Used in high-end Japanese cuisine, the meat of the fast-moving predatory fish is also used in a vast range of foods, from gourmet meals to canned and pet food. The price is decided by the quality of the meat, which can range from as low as ₹ 100 for a whole fish to ₹ 3,000 for a kilo. Sashmi grade Tuna comes from fish, which have been caught by longlining, a technique that makes use of baited hooks. The fish is caught below the Thermocline, a distinct layer of water of a different temperature.

Premium yellow-fin Saku is popular with Japanese cooks because of its uniformity, making it ideal for sashimi and other sliced presentations. “We catch a lot of tuna but only the good quality meat fetches a premium price. That’s the only way fishermen can benefit,” says Muthu Vel, adding that tuna quality depends on how the fish is handled after it’s caught and before landing.

Muthuvel believes in sustainable fishing and, as part of the training, provided ice and ice boxes to the fishing boat. He has also taught local fishermen how to keep the catch as fresh as possible. “Catch live fish, bleed and chill it.”

“Quality is assured if the fish is handled scientifically,” says Muthu Vel who learned to make Saku Block or rectangular fillet slices from a Japanese buyer. The expertise comes from experience and also requires a special knife.

He recalls catching a huge 85-kilogram tuna, 60 nautical miles off the Puducherry waters and points out that the Bay of Bengal is rich in this species. Tuna follow their food in the oceans be it a shoal of anchovies, mackerels, sardines or such and migrate long distances 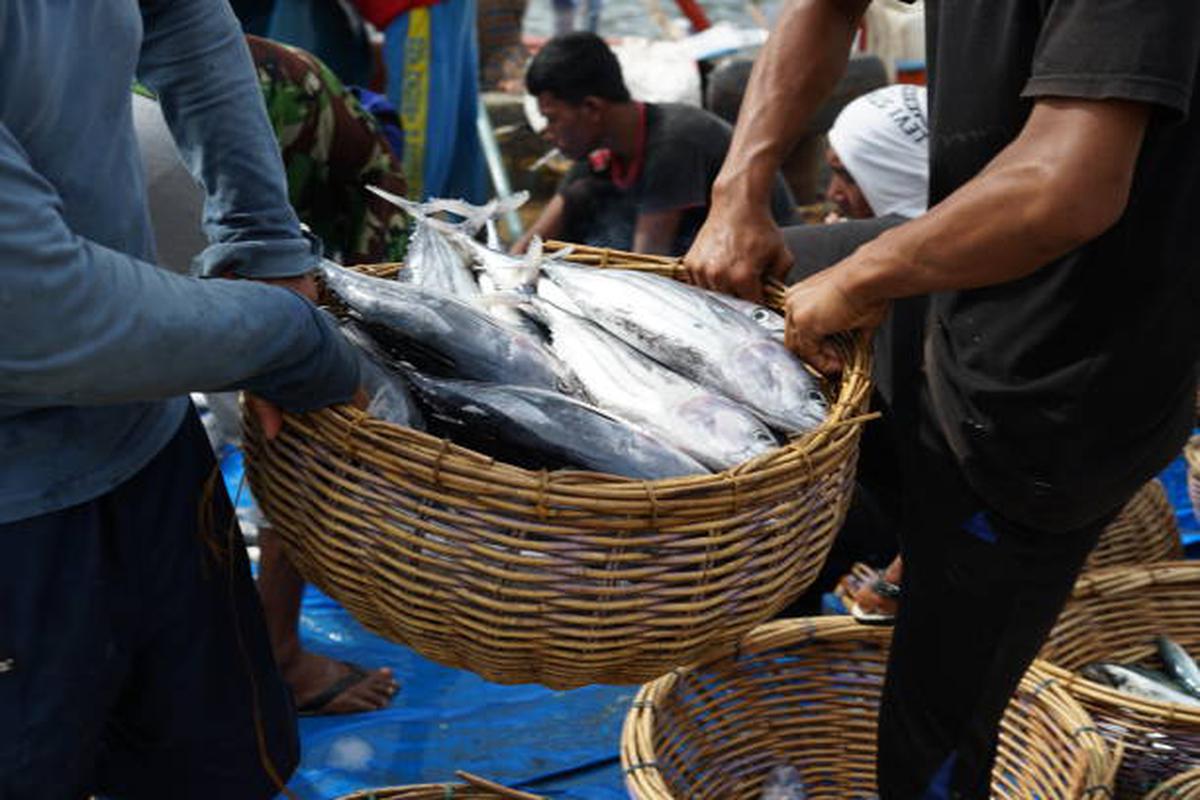 Another champion of sustainable tuna fishing is Kochi-based Tarun Kurushingal, who has been training the fishers of Pudimadaka village in Andhra Pradesh in onboard handling of the catch. “Tuna can sell for as low as ₹100 for a whole fish to about ₹3,000 a kilogram. To take the fish to that quality where it fetches premium price is the challenge,” says Tarun, adding that the Japanese have a method of retaining the meat’s freshness.

Tarun’s company Cross Currents supports the community with training and provides them with ice, ice boxes, tools and a buyback offer. The catch is graded and processed and the quality meat taken to Thailand for further value addition, which Muthuvel is doing at the source.

“I believe the business should be operated sustainably with smaller boats, smaller quantities of fish, shorter trips and smaller crews, like how Muthu Vel is doing. The super trawlers clean the waters of all the fish and that’s not good for the country or the fishing community. It affects the livelihoods of the fishermen and also dents the water’s ecology, ” says Tarun who moved, Cross Currents, his sustainable community project to Vishakapatnam during the pandemic. This year, he says, they have already managed to process “a few 100 tons of tuna.”

Onboard Handling of Tuna

It is clubbed to avoid it trashing about and also to avoid formation of lactic acid.

Incisions are made to bleed the fish and the fish dies.

Then the gills and guts are removed and the cavity thoroughly cleaned.

The cavity is stuffed with ice and the fish fully covered with ice in the hold. The Tuna is now ready for further processing once it reaches the shore.

Faraz Javeed, Director, Abad Fisheries and founder of Wildfish Seafood Store, a cold chain of gourmet fish, in Kochi, says that the government has made several attempts to train fishers on maintaining the quality of tuna on board. “The quality cannot be regained on landing,” he states, adding that the four varieties of tuna common in the Indian waters are Big eye, Yellow fin, Albacore and Skipjack.

Abdus Samad rues that the great potential of yellowfin tuna is not being tapped in India and lauds the small efforts of entrepreneurs like Muthu Vel. While the waters of Lakshadweep and Andaman Islands are rich in it, Kochi and Vizhinjam harbours lead in tuna landings followed by Visakhapatnam and Mangaluru, he adds.

Meanwhile, Muthu Vel recalls the moment when he had a first taste of Sushi at the Japanese Consulate in Bengaluru where he was invited to join in the National Day Reception of Japan on 21 February , 2020. “Feeling happy,” he wrote of his thrill at eating the famed gourmet food and posted a picture of it on Instagram. “We fisherfolk now look at Tuna very differently,” he says with a laugh over phone from Puducherry. 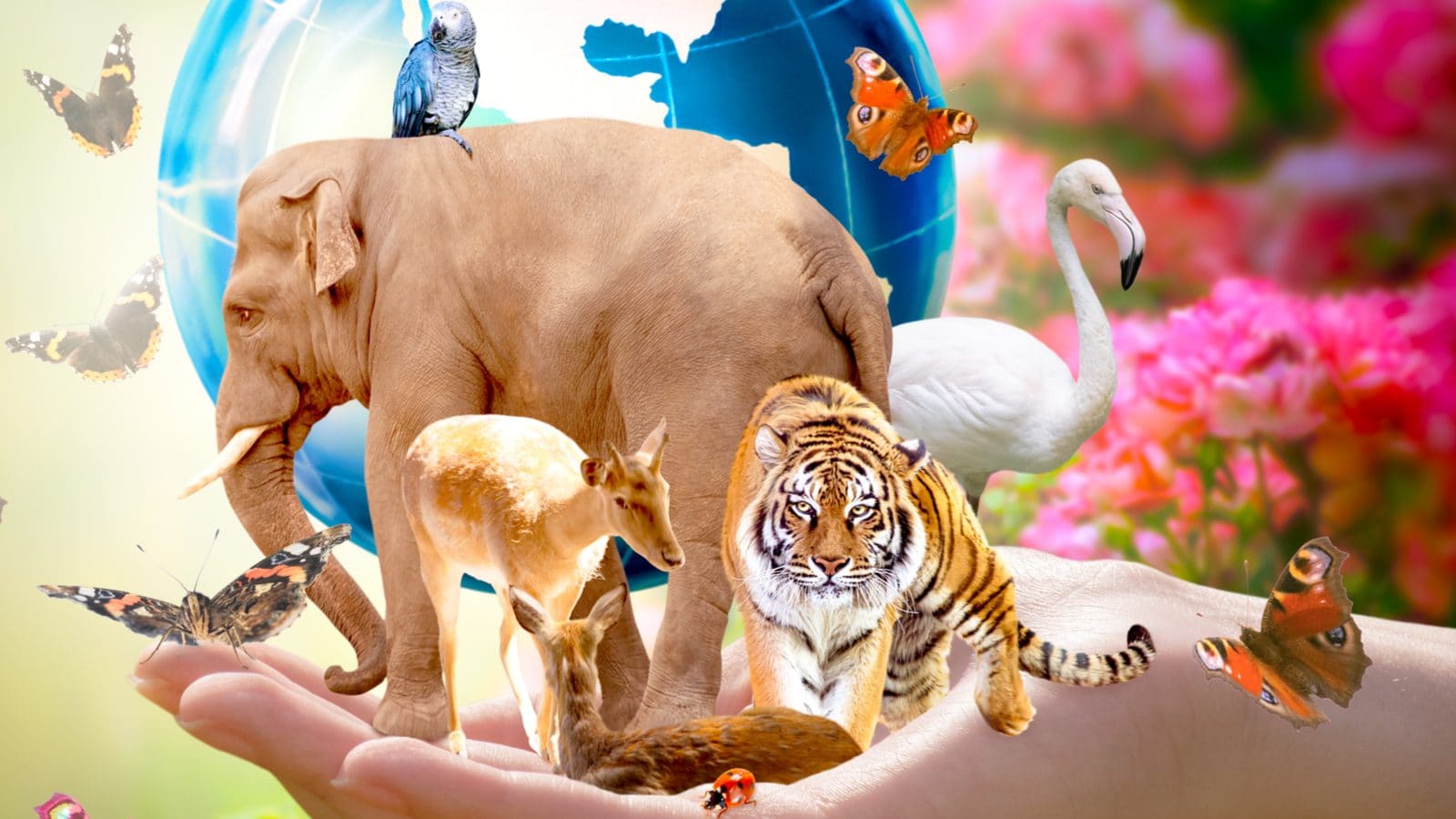