HomeWorld NewsFrench polls | ‘I’m not the candidate of one camp anymore, but the President of all of us,’ says victorious Macron
World News

French polls | ‘I’m not the candidate of one camp anymore, but the President of all of us,’ says victorious Macron 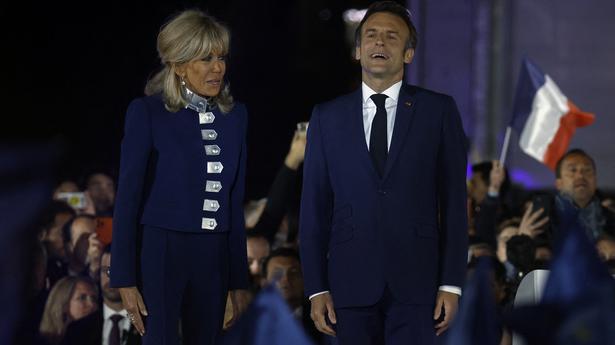 President Emmanuel Macron said a simple “Thank you!” after winning re-election, and praised the majority who gave him five more years at the helm of France.

Mr Macron also thanked people who voted for him not because they embrace his ideas but because they wanted to reject far-right rival Marine Le Pen.

“I’m not the candidate of one camp anymore, but the President of all of us,” he said.

He arrived on the plaza where his supporters gathered, beneath the Eiffel Tower, to the sound of the “Ode to Joy,” the European Union’s anthem, hand in hand with his wife, Brigitte.

But they quickly looked ahead to June legislative elections – as did Ms Le Pen in her concession speech.

Francois Denormand, a retired dentist planning to run for a seat as a lawmaker for Le Pen’s National Rally party in June’s legislative elections said that what he called “the third round” starts tomorrow.

“We must continue to fight,” he said. “We can lose the battle but not the war.”

Nineteen-year-old Paul Renkert, waving a French flag, admitted that “I’m sad.” Renkert, who had traveled from the eastern Alsace region, said he had invested time in Ms Le Pen’s campaign “because I believe in the future of France.” He is looking ahead to the legislative elections and five years in the future when a new president is elected. Ms Le Pen has not made known her intentions, but “I don’t think she’ll abandon us,” he said.

Guests from abroad were among those invited to the soiree. Among them was Tom Lamont, with Belgium’s far-right Vlaams Belang party, an ally of Ms Le Pen’s National Rally. He, too, sent out a message of hope. “It’s a disappointment she lost but we see the right-wing movements is growing in France … and maybe in five years we will have a right-wing president” here,” he said.