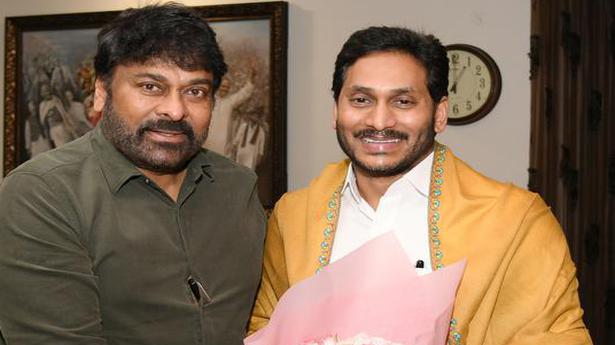 Issues raised will be referred to govt. panel, says actor

Actor K. Chiranjeevi’s deliberations with Chief Minister Y.S. Jagan Mohan Reddy at his camp office here on various issues related to the Telugu film industry, including the government’s decision to reduce the cinema ticket prices which kicked up a major controversy, are expected to yield a positive outcome for all the stakeholders.

Addressing mediapersons after his meeting, which was kept under wraps till Thursday morning, Mr. Chiranjeevi said he had a nice interaction with the Chief Minister who was receptive to the points raised by him, and exuded confidence that the result of the one-on-one meeting would be satisfactory to everyone.

Mr. Chiranjeevi stated that the Chief Minister heard the views expressed by him carefully and was keen on amicably sorting out the issues confronted by producers, exhibitors and, most importantly, the huge number of workers whose sweat and toil gave a cinema its final shape.

“The tinsel town appears to be glamorous, but it is not so rosy inside. There are many leading a hand-to-mouth existence”, the ‘Megastar’ observed.

Further, Mr. Chiranjeevi said the Chief Minister told him that he would refer the issues to the committee appointed by the government, and only then a G.O. would be released, but after having yet another round of talks.“If the Chief Minister wants me to come again alone, I will go, and don’t mind taking a delegation if allowed,” he said.

Mr. Chiranjeevi said there was a feeling of insecurity in the film industry and some rash statements precipitated the recent crisis. “Let us not have apprehensions. I have taken the problems faced by all stakeholders to the Chief Minister’s notice. The meeting was fruitful,” he added, while saying that Mr. Jagan would take a relook at the G.O. No. 35 (suspended by the High Court), which created a gap between the government and the film industry.

It may be noted that the government’s decision to fix the cinema ticket prices antagonised a section of the producers and exhibitors, and it peaked in the run-up to director Ram Gopal Varma’s meeting with Minister for Cinematography Perni Venkatramaiah a few days after the former shot a barrage of questions through Twitter to the Minister on the government’s interference with the cinema ticket pricing.

Mr. Varma’s argument was that the government could regulate but not fix the price of cinema tickets, which should be left to the discretion of producers and others involved in the film-making process.

A delegation of producers and exhibitors had discussions with Mr. Venkatramaiah and the likes of Dil Raju met him separately some time back last year. But, the crisis only deepened owing to the exchange of words between the two sides. Amidst all this, there was a spat over alleged violations of licensing norms by the theatres.