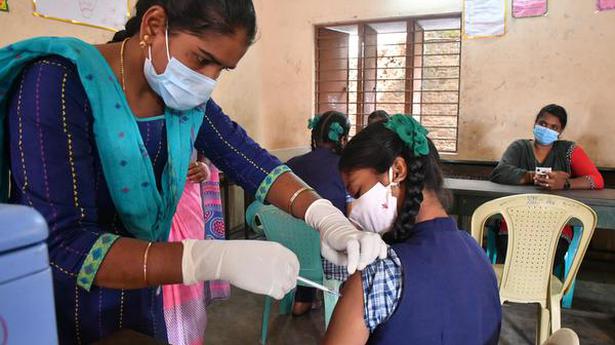 More than 18 lakh (18,52,611) precaution doses of COVID-19 vaccine have been administered to healthcare workers, frontline workers and those aged 60 and above with comorbidities since Monday.  Over 2,81,00,780  doses  have been given to beneficiaries in the 15-18 years age group so far.

You can track coronavirus cases, deaths and testing rates at the national and State levels here. A list of State Helpline numbers is available as well.

Here are the updates:

The Biden administration said on Tuesday that federal agencies should require weekly COVID-19 testing by Feb. 15 for unvaccinated government employees who are working on-site or interacting with the public.

A vaccine mandate imposed by President Joe Biden in September covers about 3.5 million federal workers and required them to be fully vaccinated by Nov. 22 or face potential discipline or even termination.

The administration said on Tuesday that unvaccinated employees – including those seeking religious or medical exemptions – “should be tested weekly for any week during which they work on-site or interact in person with members of the public as part of their job duties. Agencies may require more frequent testing.” – Reuters

Omicron may be headed for a rapid drop in U.S. and Britain

Scientists are seeing signals that COVID-19′s alarming omicron wave may have peaked in Britain and is about to do the same in the U.S., at which point cases may start dropping off dramatically.

The reason: The variant has proved so wildly contagious that it may already be running out of people to infect, just a month and a half after it was first detected in South Africa.

“It’s going to come down as fast as it went up,” said Ali Mokdad, a professor of health metrics sciences at the University of Washington in Seattle. – AP

Quebec, Canada’s second-most populous province, is working on a plan to require a “health contribution” from adults who refuse to get a COVID-19 vaccination for non-medical reasons, Premier Francois Legault said on Tuesday.

Legault said that unvaccinated people put a financial burden on vaccinated residents and in addition to finalizing the amount to be charged, the province is also working on the legal aspect of such a levy, he said.

While governments globally have imposed movement restrictions on the unvaccinated and few have levied fines on the elderly, a sweeping tax on all unvaccinated adults could be a rare and controversial move. – Reuters

The number of COVID-19 cases in Mumbai declined for the fourth consecutive day, with the city recording 11,647 infections on Tuesday. The positivity rate, which indicates the number of positive cases per 100 tests conducted, also reached a seven-day low of 18.7%.

The initial data from the city, which recorded more than 1.75 lakh cases in the past 40 days, indicates a possible early flattening of the case curve.

Data from Delhi and Chennai too hinted at a possible slow down of the spread of infections. In Delhi, 21,529 cases were recorded on Tuesday. While the positivity rate rose slightly above 25%, the pace of increase in cases has slowed down. A similar trend was recorded in Chennai too on Tuesday.

Biden says U.S. is on the right track in fight against COVID-19

President Joe Biden on Tuesday expressed confidence the United States was on the right track in the fight against the COVID-19 pandemic, even as the country grapples with a surge in infections sparked by the fast-spreading Omicron variant.

White House officials have said the situation is different from previous stages of the pandemic because more people are getting protection from vaccinations and booster shots.

“I’m confident we are on the right track,” Biden told reporters on Tuesday.

However, Biden acknowledged that he was concerned about the pace at which the virus was spreading worldwide because, “it’s not slowing up very much.” – Reuters

Lockdown in China amid Omicron fears

Several cities in China have locked down hundreds of thousands of their residents and carried out mass testing amid concerns that the spread of the Omicron variant could threaten the country’s “zero COVID” strategy.

Cities in central Henan province as well as the municipality of Tianjin in the north, near Beijing, have reported local spread of Omicron cases, prompting the sweeping measures. The timing is of particular concern for China’s authorities with both the Winter Olympics in Beijing and the annual Chinese new year holiday in the first week of February.

Henan accounted for most of the 110 new local cases reported in China on Monday – a high number for a country following a “zero COVID” approach including continued restrictions on international travel for close to two years – with the rest in Tianjin and in northwestern Shaanxi.

The Calcutta High Court on Tuesday modified its order regarding the Ganga Sagar Mela and said only those having COVID negative report in the past 72 hours would be allowed on the Sagar Island.

“Only those who are having COVID negative in the RTPCR report of within 72 hours will be permitted to enter the Sagar Island,” said a Division Bench of Chief Justice Prakash Shrivastava and Justice K.D. Bhutia.

The current surge in COVID-19 cases is driven mostly by the Omicron variant, a top health expert in India said on Tuesday. He said the rise in numbers was expected to continue for the next few weeks. At present, COVID deaths were being reported mostly among those with co-morbidities, the expert said.

Following the continued spike in cases across India, Union Health Minister Mansukh Mandaviya on Tuesday held a virtual meeting with members of the Indian Medical Association (IMA) to discuss the clinical treatment guidelines and measures to be brought in to ensure that correct information was provided to the public.

“Most COVID-19 cases in India currently seem to be driven by the Omicron variant,” said N.K. Arora, who heads the National Technical Advisory Group on Immunisation (NTAGI), COVID Working Group. The early indication given by the IIT Kanpur model noted that transmission was taking place very actively and that India should be reaching its peak in the near future. “But it is likely to last for several weeks before it subsides,” Dr. Arora told ANI.

WHO warns of virus surge in Europe

More than half of people in Europe are on track to contract the Omicron coronavirus variant in the next two months if infections continue at current rates, the World Health Organization said on Tuesday.

“At this rate, the Institute for Health Metrics and Evaluation (IHME) forecasts that more than 50% of the population in the region will be infected with Omicron in the next six to eight weeks,” Mr. Kluge told reporters.

The WHO’s European region comprises 53 countries and territories including several in Central Asia, and Mr. Kluge noted that 50 of those countries had confirmed cases of the Omicron variant. – AFP

The ICMR’s National Task Force for COVID-19 has decided against including antiviral drug molnupiravir in the Clinical Management Protocol for COVID-19 as of now, official sources said on Tuesday.

The experts of the task force cited safety concerns, and argued that Molnupiravir was not of much benefit in COVID treatment to arrive at the decision in a meeting held on Monday.

According to the Health Ministry, Molnupiravir is an antiviral drug that inhibits SARS-CoV-2 replication by viral mutagenesis. This anti-COVID pill got the Drug Regulator General of India’s approval on December 28 for restricted use in emergencies. Mutagenesis is a process by which the genetic information of an organism is changed by the production of mutation.

Fall in COVID-19 cases in Mumbai for fourth day

The number of COVID-19 cases in Mumbai declined for the fourth consecutive day, recording 11,647 infections on Tuesday. The positivity rate, which indicates the number of positive cases detected per 100 tests conducted, also reached a seven-day low of 18.7%.

The initial data from the city, which recorded more than 1.75 lakh cases in the past 40 days, indicated a possible early flattening of the case curve.

Data from Delhi and Chennai too hinted at a possible slowdown of the spread of infections. In Delhi, 21,529 cases were recorded on Tuesday. While the positivity rate rose slightly above 25%, the pace of increase in cases has slowed down. A similar trend was recorded in Chennai too on Tuesday.

COVID-19 experts in Karnataka have expressed mixed views over the Indian Council of Medical Research’s (ICMR) latest advisory on ‘Purposive Testing Strategy for COVID-19’ that said contacts of COVID-19 patients do not need to be tested unless identified as high-risk based on age.

According to the advisory issued on Monday, asymptomatic patients undergoing surgical or non-surgical invasive procedures, including pregnant women in/near labour who are hospitalised for delivery, should not be tested unless warranted or symptoms develop. It said no emergency procedure, including surgeries, should be delayed due to lack of a test. Besides, inter-State travellers also need not be tested.

However, COVID-19 experts in Karnataka said the advisory is against the basic principle of containing the pandemic.

As the pandemic is peaking, most COVID-19 patients on ventilator beds or oxygen support in two city hospitals are unvaccinated, said doctors. The situation, however, is different in some other hospitals.

Sumit Ray, head of the Department of Critical Care at Holy Family Hospital, said: “One of the nine patients is fully vaccinated, but has been undergoing chemotherapy. Also, all four patients on the ventilator are unvaccinated. Most with serious illness are either unvaccinated or partially vaccinated.”