TPCC president asks Centre to get GO 317 scrapped by President 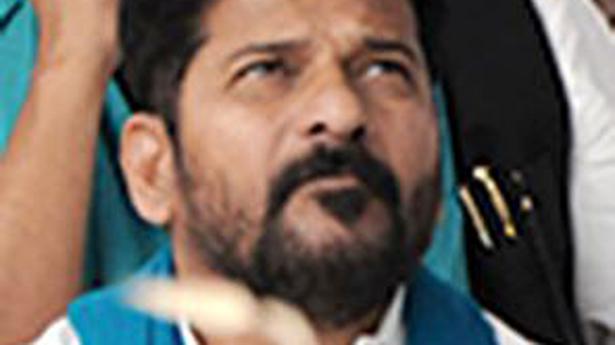 
Telangana Pradesh Congress Committee (TPCC) president and MP A. Revanth Reddy demanded that the BJP government at the Centre initiate measures to scrap the GO 317 on local cadre employment of government staff as it violates the provision of the Presidential Order.

Speaking to reporters along with senior Congress leaders Mohammed Ali Shabbir, Anjan Kumar Yadav, Ponnam Prabhakar, Mahesh Kumar Goud, Mallu Ravi, Maheshwar Reddy and others on Monday, Mr. Revanth Reddy said that Congress party had identified the problems being faced by the people and sought their immediate resolution. However, he said that the TRS and BJP were not exploring solutions, but dragging on public issues to extract political gains.

“G.O. 317, meant for allocation and transfer of government employees and teachers, was issued as per the Presidential Order which was introduced during the previous Congress regime to do justice to the people of Telangana. After the formation of Telangana, the first four zones went to Andhra Pradesh while Zone 5 and Zone 6 remained with Telangana. The State government reorganised those zones in accordance with the new districts. However, utter injustice was done with the employees and teachers in the GO 317 and locals were not given preferences which is mandated in the Presidential Order,” commented Mr. Revanth Reddy.

The TPCC chief said that the Central government could get the GO 317 scrapped by referring it to the President of India. Instead of finding an immediate solution to the problem, BJP is politicising the issue he said adding that several actors from other States were imported to play a role in BJP’s drama on GO 317.

Referring to Chief Minister’s meeting with the Left party leaders, Mr. Revanth Reddy said Mr. Chandrasekhar Rao has floated the rumours of a non-BJP and non-Congress front on the directions of Prime Minister Narendra Modi. “Mr.Chandrasekhar Rao tries to target parties who are either constituents of United Progressive Alliance like the NCP or DMK or those working in understanding with the Congress like the CPI and CPI (M). His only intention is to harm the Congress party by distancing other parties from it with the talk of a third-front.” The TPCC president dared Mr. Rao to declare support to Akhilesh Yadav’s party in UP elections and campaign against Chief Minister Yogi Adityanath.