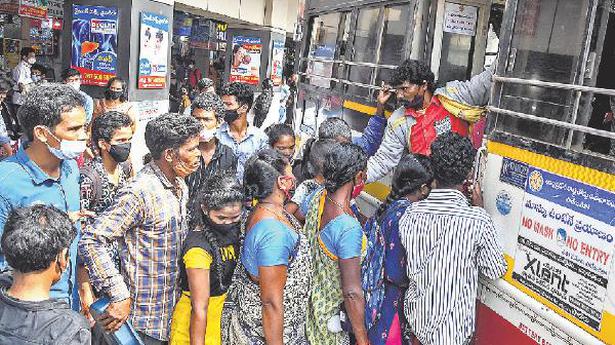 Ravi Teja B., an NRI working in the U.S.A., came by a domestic flight to the city recently. He was surprised when the airport staff insisted that he should undergo an RTPCR test again, though he tested RTPCR negative, after he had arrived in Hyderabad, a couple of weeks ago.

The sample was taken and he was allowed to leave. “I was under the impression that no checks are being done in Vizag, but I have no regrets. I have seen some of my co-passengers, who had come from abroad, hiding the fact to avoid undergoing the test,” he told this correspondent.

“We are doing random testing for 2% of arrival passengers. Domestic passengers are being asked whether they had travelled abroad and if their answer is in the affirmative, they are being tested, if they do not have an RTPCR negative report, obtained 72 hours prior to their arrival in Vizag,” says Airport Director K. Srinivasa Rao.

“If passengers exhibit any symptoms of cough and cold they would be invariably tested and have to remain in isolation. Passengers going to Mumbai and other cities would have to carry RTPCR negative reports, based on the guidelines at those airports,” he says.

“The occupancy of the Vizag-Singapore Scoot flight, which was revived recently, is also very low. This is because only permanent residents or Indians working there are allowed to fly. We are conducting random tests for 2% of passengers arriving by this flight. Tourists and even transit passengers are not being allowed to travel in view of COVID-19 restrictions,” he adds.

The railways are yet to revive thermal scanning and strict social distancing, which was withdrawn after the steep decline in active cases in August, last year. The only visible enforcement at present is the insistence on wearing of masks at the entry/exit gates of the Visakhapatnam railway station.

A fine of ₹500 is being imposed on the people for not wearing masks at the railway station. This does not seem to deter passengers as many can be seen moving around on the platforms without masks. “In Delhi and Mumbai, where the cases are high, COVID-19 protocols are being strictly implemented and soon they will be implemented here also,” says a railway source.

“We are making frequent announcements on the public address systems at the Dwaraka bus station. The buses are being sanitised and ‘no mask, no entry’ stickers are displayed at the entrance of the buses. Our crew have been instructed to create awareness among passengers,” says K. Venkata Rao, deputy chief traffic manager (Rural).

“Lockdown should be only for medical preparedness to ensure availability of beds and testing facilities. It is no longer useful now. The public should have ‘self control’ by wearing masks, keeping social distance and frequently washing hands, which is the only way out to contain the pandemic,” says Dr. P.V. Sudhakar, principal, Andhra Medical College (AMC).

“Vaccination and following COVID-appropriate behaviour, irrespective of the variant, is a must,” he adds.

“The onus is on the public to ensure their own safety and that of people around them,” say A. Sanni Babu and Daniel, frequent travellers, concurring with Dr. Sudhakar’s views.