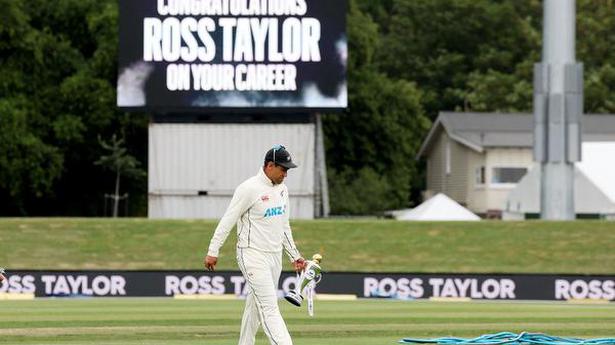 After the fall of Bangladesh’s ninth wicket, the crowd chanted for Ross Taylor to be given the ball and New Zealand skipper Tom Latham obliged

A wicket with the final delivery of his Test career along with a series-levelling win over Bangladesh, veteran New Zealand batter Ross Taylor couldn’t have asked for a more befitting farewell after a 15-year-long journey in red-ball cricket and the star agreed it was “great”.

A talisman of New Zealand cricket, Taylor ended his Test career by dismissing Ebadot Hossain to help the hosts beat Bangladesh by an innings and 117 runs to level the series 1-1 at Christchurch on Tuesday.

“It’s great to finish off your career with a win and a wicket, I wanted to finish off with a win and the guys did it. Bangladesh put us under a lot of pressure a number of times, it’s only fair that we share the series,” an emotional Taylor told the official broadcasters after the match.

After the fall of Bangladesh’s ninth wicket, the crowd present at the Hagley Oval chanted for Taylor to be given the ball and New Zealand skipper Tom Latham obliged.

The 37-year-old veteran of 112 Tests couldn’t have imagined a better end to his five-day career by inducing a false shot from Hossain with only his third ball and Latham did the rest to give Taylor only his third Test wicket.

Taylor had previously bowled only 16 overs in his entire Test career — the last time being eight years ago.

“The series was great – I was wondering if we need to come back tomorrow, but the boys were fantastic. It became a bit funky towards the end, I chunked it up and Tom (Latham) said it was the most precious thing I did over the whole game,” Taylor said about the wicket.

“I have thoroughly enjoyed representing my country, have played a lot here (in Christchurch), spent a lot of time and it’s a great way to finish,” he added.

Taylor, a former New Zealand captain, was accorded a standing ovation by the crowd. He was presented the match ball and was given a guard of honour by the Bangladeshi players.