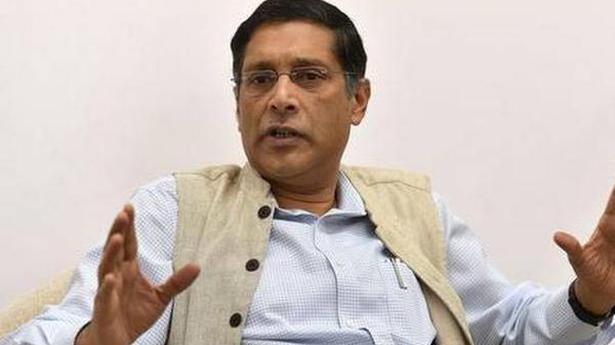 Member of Economic Advisory Council to the Chief Minister Arvind Subramanian said he was in favour of the State introducing a universal basic income scheme. An idea of a minimum basic income would help complete Tamil Nadu’s social safety net project and help in individuals realising their potential, he added

He was speaking at a webinar on the topic ‘Tamil Nadu’s major development challenges and how can policy respond?’, organised by Chennai International Centre on Monday.

Mr. Subramanian said Tamil Nadu had a successful social development model and currently beneficiaries were targeted based on particular criteria.

His personal view is universal basic income is one more step where one can look at the leakages happening and rationalise and design a well targeted minimum income programme.

Mr. Subramanian said his idea was a quasi-universal basic income model where the rich were excluded and the rest covered.

“It is an easier task to identify the rich people, than identifying the poor people,” he said.

Mr. Subramanian pointed out Tamil Nadu’s growth had lost its way partly because of the economic challenges faced by India and also some local factors like the governance deteriorating in the last 7-8 years. Moreover, there was much more political instability.

Despite having the technology and talent, Chennai had only three Unicorns (startups valued over $1 billion) out of 80 in India, he added.

“Unicorns were the boom sector in India in the last three years and Tamil Nadu lagged behind in this dynamic sector. The State government is addressing it now,” Mr. Subramanian said.

However, he said that alone would not be enough and the State needed to focus on export-oriented labour intensive sectors.

Mr. Subramanian said the State had historical advantages in clothing, footwear and auto sector and some of it had been lost.

“As China has become richer and less competitive, it has been vacating these sectors from 2010 and there is a $150 billion export opportunity. This is currently going to Vietnam, Bangladesh, Indonesia and Thailand. Tamil Nadu is well placed to grab some of these opportunities,” Mr. Subramanian said.

It was also important to address the resource constraint faced by the State with high deficits and most of the revenue going towards interest payments.

Two big areas which needed reforms were property tax sector and power sector. He called for innovative property taxes. The problem of power sector with the State’s power utility having massive debt had to be addressed. This was destabilising the State’s resource and macroeconomic position, Mr. Subramanian added.

He said power tariffs for manufacturing should be reduced and that resource should come from elsewhere from the power sector. This would add to the State’s competitiveness and attractiveness as an investment destination.

Tamil Nadu was one of the most urbanised States and earned ₹2,500 crore from property tax, which was not even a fraction of what other less urbanised States like Maharashtra and Karnataka earned.

Asked about property tax and power reforms being politically sensitive topics, he said at the moment there seemed to be optimism about the political will.

Mr. Subramanian also pointed out there had been strain in the relationship between the Centre and the States mainly due to centralisation. This issued had to be addressed and there should be a relook at how revenue generated by States were redistributed.