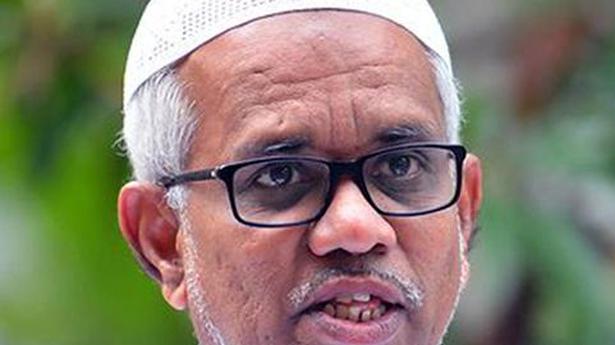 
Samastha Kerala Sunni Yuvajana Sangham (SYS) leader Abdussamad Pookkottur has denied news reports that quoted him as saying that the Samastha Kerala Jamiyyathul Ulama can go hand in hand with communist parties in the State.

Mr. Pookkottur told The Hindu that there were no two opinions about the communist ideology, where a religious believer would have no place. However, he said that everyone who associates with the communist parties in the State could not be described as anti-religious or atheist.

“There may be people who have chosen to cooperate with communist parties because of their circumstances. They may have to leave or been expelled from one party; they may be without any choice; or they may be associating with it for some gain. They may be God-fearing and religious, and we can’t call them Communists because they associate with that party,” said Mr. Pookkottur.

He said there was nothing wrong in the Samastha Kerala Jamiyyathul Ulama, the largest body of Muslim scholars in the State, cooperating with the Left Democratic Front (LDF) government. “It is a government made up of different parties, including the communist parties. Rather than choosing a confrontationist path, it is more sensible to adopt a cooperative line with the government,” he said.

Mr. Pookkottur’s interview, given to a private television channel some days ago, was circulated on Sunday portraying him speaking in favour of tying up with the communists. “No Muslim can be a member of the communist party in true spirit, as the party ideology rejects faith in God,” he said.

The Samastha was in the centrestage of news since it disproved of the Indian Union Muslim League (IUML)’s call for a campaign by using mosques during Friday Juma against the government decision to leave Waqf Board appointments to the Kerala Public Service Commission (PSC).

The IUML tried to overcome the embarrassment it suffered because of the Samastha stand by organising a mammoth rally on Kozhikode beach on December 9. However, the rally caused further embarrassment to the IUML when one of its speakers, Abdurahman Kallayi, personally targeted Chief Minister Pinarayi Vijayan and his son-in-law and Public Works Minister P.A. Mohammed Riyas.

IUML leaders had to apologise for the vituperative remarks Mr. Kallayi made at the rally.

The Samastha followed it up with a mega meeting in Malappuram a few days ago, in which one of the resolutions warned the Muslim community against associating with the communist party.

However, Samastha president Sayed Mohammed Jifri Muthukoya Thangal was quick to distance himself from the anti-communist resolution, saying that it was passed without his knowledge or consent. Mr. Thangal’s denial of the resolution made it clear that there was a rift within the Samastha vis-à-vis its political stand.