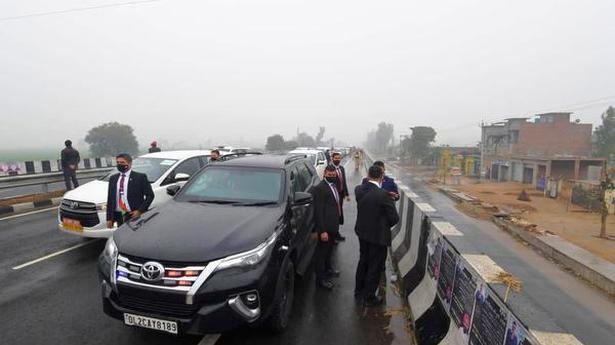 Ongoing probes by Punjab govt. and Centre will have to stop, says CJI.

The Supreme Court on Monday said it will form a committee headed by a retired Supreme Court judge to conduct a time-bound and independent inquiry into the circumstances that led to Prime Minister Narendra Modi’s convoy being stuck for several minutes on a flyover in Punjab on January 5.

A Bench led by Chief Justice of India N.V. Ramana indicated that ongoing inquiries by both the Punjab and Centre would have to stop for the time being.

The top court said its committee will submit a report within a specified time after examining the records on the security arrangements, which have already been seized by the Registrar General of Punjab and Haryana High Court as per its orders on January 7.

The court indicated that the High Court’s Registrar-General, along with the officers who helped him seize and protect the documents, who include the DGP, Chandigarh, and IG, National Investigation Agency, would be part of the committee.

There would be another member in the committee. Punjab has suggested its Additional DGP (Security) as an alternative.

Punajb’s Advocate-General D.S. Patwalia, at the start of the hearing, said the State feared it would not get a fair hearing. It said show cause notices had already been issued by the Centre to its officers, mentioning disciplinary action against them for the security lapse concerning the PM’s convoy on January 5.

Mr. Patwalia said all the State wanted from the Supreme Court was an opportunity for a fair hearing before a neutral committee.

“If I am guilty, please hang me and my officers, but give me a fair hearing,” Mr. Patwalia requested the court.

He said the Punjab government gave the issue of the Prime Minister’s security the utmost importance and wanted a full and comprehensive inquiry into any security breach that may have happened on January 5.

The Advocate-General, however, said the show cause notices indicated that the Centre already considered Punjab’s police officers prima facie guilty of violating their obligations towards the Prime Minister’s security. This had been arrived at without any evidence or records, all of which had been already seized on the orders of the Supreme Court, Mr. Patwalia indicated.

Mr. Mehta countered that the show cause notices were issued before the top court hearing on January 7. He said there had been a “complete intelligence failure” on the part of the State. Besides, he submitted, it was an admitted fact that there had been a security lapse in violation of the Special Protection Group Act and the ‘Blue Book’.

“When there is a complete breach, there is no question of hearing. Officers responsible are served with notice. There is an admitted fact of breakage. This is a rarest of rare case. It cannot brook any delay,” Mr. Mehta emphasised.

The court asked the Centre why the judiciary had been asked to intervene if the government had “presumed everything” already.

“The impression you give is that you have presumed everything… Then why should the court go into all this?” the Bench asked.

At one point, Justice Surya Kant said the show cause notices seemed “self-contradictory.”

Justice Kant said there may have been some lapse, but who was responsible for that had to be found on the basis of the facts.

“If you want to take disciplinary action, what is left for this court to do?” the CJI asked the Centre, before conveying the decision to form the inquiry panel led by a former Supreme Court judge.

The final order is likely to be published later in the day.