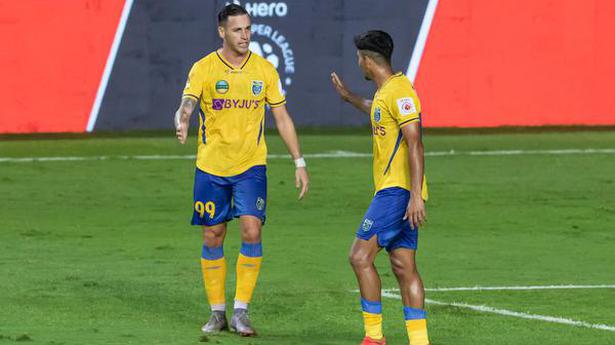 
Kerala Blasters found itself in unfamiliar territory on Sunday night — at the top of the ISL table. A 1-0 win against Hyderabad FC at Vasco’s Tilak Maidan Stadium took it there. The winner was netted by Alvaro Vazquez late in the opening half. And it was a stunning goal too.

Blasters has 17 points, the same as defending champion Mumbai City. An inferior goal difference meant that Mumbai dropped to the second spot. Hyderabad, which remained on 16 points after its first defeat in nine matches, slipped to third.

Ivan Vukomanovic’s boys extended their unbeaten run to nine — quite a feat for a side which finished second from bottom last season.

On this night, Hyderabad nearly took an early lead, but Edu Garcia’s well-taken free-kick, in the ninth minute, was pushed away by Blasters custodian Prabhsukhan Gill. Almost 15 minutes later, a better save came at the other end as Laxmikant Katti denied Jorge Pereyra Diaz. His header from close in, off a superb cross from Adrian Luna, was stopped by the Hyderabad goalkeeper.

There wasn’t much any goalkeeper could have done against Vazquez’s brilliant volley, though. Harmanjot Khabra’s long throw-in into the box was first headed by Samad Sahal before it reached the Spaniard, who made no mistake.

HFC received another blow when Bartholomew Ogbeche got his fourth yellow and will miss the next game.