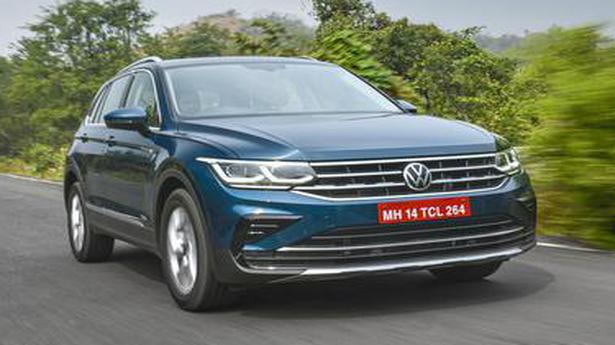 Apart from a thirsty engine, the Tiguan is a luxurious, refined, spacious and decent SUV to drive

It was back in 2017 when VW brought the current-generation Tiguan to India. The diesel-only, 5-seat premium SUV was assembled locally and touted as a cheaper alternative to compact luxury SUVs like the BMW X1 and Mercedes-Benz GLA. Fast forward to 2020 and VW pulled the plug on the Tiguan, replacing it with the larger petrol-only Tiguan Allspace.

Now the 5-seat Tiguan is back but with two big changes over the 2017 model — it has received a facelift and the diesel mill has made way for the 2.0-litre TSI petrol unit from the Allspace. So, what is it like?

Starting with the exterior, it is the nose of the SUV that gets the most notable change. The previous car’s blocky headlamps, grille and bumper make way for a more flowing design that is in line with newer VWs. The headlamps extend onto the flanks like the arms on a pair of sunglasses, and within them you will find new DRL signature and ‘IQ Light’ beams — VW speak for Matrix adaptive LED headlamps. There is more chrome in the grille this time, and even some in the front bumper.

Around the sides, it is the same straight-laced and crease-heavy profile as before, with the exception of new-design, 18-inch alloy wheels. And at the rear, there are reprofiled LED tail-lamps, more chrome in the bumper, and the Tiguan nameplate which has now moved to the centre of the tailgate. You will also notice the new, flatter VW logo incorporated all around.

Inside, the basic design of the cabin is largely unchanged. It is still an all-black cabin, which is incredibly well built. Fit and finish are all but flawless and just about every surface is soft-touch. What has changed? There is VW’s new-generation steering wheel, which feels like a long-overdue upgrade. You now get a 10-inch digital instrument cluster (like in the Allspace) with three configurable displays. The 8.0-inch touchscreen uses VW’s new operating system, and the gear selector too, is of a new design. The USB ports are all Type C now, while the ambient lighting can be adjusted between 30 colours.

A change we are not so hot on is the shift from rotary knobs to touch panels for the AC controls; they are distracting to use on the move. Other feature standouts are heated leather seats (ventilated ones would have been ideal), three-zone climate control, on- and off-road drive modes and a panoramic sunroof, but what we would also have liked to see at this price is a 360-degree camera and wireless phone charging.

The sculpted seats, front and rear, can feel a little snug for larger frames, but they are comfortably cushioned. Rear-seat space, as before, is ample, and there is plenty of thigh support from the seats. A middle passenger will find it a squeeze, though, and will have to contend with a large centre console between their feet. What is more, you can adjust the seat recline angle and slide the bench forward or back to liberate more luggage room, should you need it. Not that you would, with 615 litres on offer, and the option to split-fold the backrest 40:20:40.

As with every VW Group car in India now, the updated Tiguan is petrol only, and uses VW’s 190hp, 320Nm, 2.0-litre TSI mill, which also did duty in the Tiguan Allspace. It is a fine motor in the vein of many great TSIs that have gone before it. The Tiguan even feels a little sprightlier and lighter on its feet than its Allspace sibling, and in a quick performance test, it did 0-100kph in under 8.5sec (it even has Launch Control). This unit though is not an outright sporty engine and is most comfortable driven at eight-tenths than being stretched hard. The DSG gearbox, meanwhile, smooth and quick to shift as always.

The 2.0-litre TSI though can have a drinking problem if you are not careful — we have noticed this in the Allspace and the Skoda Superb. This is despite the use of engine stop-start and decoupling the engine during coasting, and though we did not do an instrumented fuel efficiency test, it did fare a little better than the Allspace, nudging the 10kpl mark in mixed driving.

Out on the road,the Tiguan is a sound dynamic package. There is that brilliant European solidity with which it goes about its business, and just beyond a sliver of underlying firmness exists an all-conquering ride quality. The tall 55-profile tyres around 18-inch wheels, combined with robust suspension, can take an absolute pounding from the worst Indian roads can throw at them.

Changing drive modes does not affect the suspension, but then you do not need it to; the standard set-up is just that good. The suspension also affords it good body control in the corners, and there is plenty of grip from the AWD system too, but like with the engine, you do not want to push too hard. That is because the steering, though sharp enough for everyday use, is not one to coax you into a spirited drive, and this, ultimately, is a big, heavy SUV that is geared more to comfort.

It may have been cheaper than SUVs from luxury brands but compared to its peers in the premium SUV space, the old Tiguan was a pricey affair. Four years later, this new one does not change that impression. At ₹ 31.99 lakh (ex-showroom, India), it is out of the league of the Compass and Tucson, duking it out instead with the likes of the Citroen C5 Aircross. Moreover, with a petrol engine, you are not exactly recouping the sticker price with running costs over time. Yes, with petrol prices the way they currently are, that thirsty engine will likely factor into the buying decision.

If you are fine with that, however, what you are getting is a premium SUV that does just about everything near-perfectly. It is luxurious, well made, well equipped, comfortable, refined, spacious and even pretty decent to drive. In fact, it still delivers on that promise VW made — it is pretty much everything you want from a luxury SUV, at a (slightly)lower price.