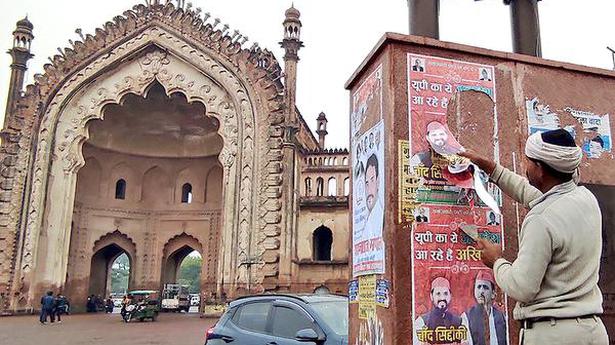 
The authorities have begun removing the hoardings and the posters put up by the political parties across Uttar Pradesh as the model code of conduct has come into effect with the Election Commission announcing polls dates for the State.

“The model code of conduct has been implemented in the State, and it will be followed. All District Magistrates (district election officers) have been given the responsibility to implement it. They will be sending their reports on a regular basis,” Chief Electoral Officer Ajay Kumar Shukla told PTI on Sunday.

Lucknow DM Abhishek Prakash said as per the ECI directives, the model code of conduct has been implemented, and it will be strictly adhered to. Instructions have been sent to the municipal commissioner of Lucknow, he said.

Following this, teams of the Lucknow Municipal Corporation were seen pulling down banners and posters from Saturday itself.

Reports coming from Basti said the administration has started removing banners, posters and hoardings from various places in the district. District Magistrate Saumya Agarwal said banners and posters of political parties put up on public properties are being removed.

Similar reports were received from Etawah and Farrukhabad.

The model code is a set of guidelines, issued by the ECI, for political parties, candidates, government and the party in power during elections concerning speeches, announcements, election manifestos and general conduct.

It includes restrictions of banners and posters on private properties without prior permission and stipulates that hoardings and advertisements put up at the cost of the public exchequer depicting the achievements of the party in power shall be removed forthwith by the authorities.