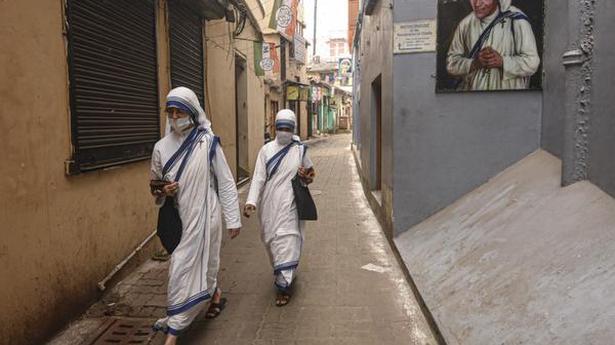 The Union Home Ministry had cited ‘adverse inputs’ for rejection.

The Ministry of Home Affairs (MHA) on January 7 restored the FCRA registration of Missionaries of Charity (MoC), the Catholic religious congregation set up by Nobel laureate Mother Teresa.

The move comes just days after the Ministry issued a statement that the FCRA registration of the MoC was not renewed as “some adverse inputs were noticed”.

The registration was renewed, making MoC eligible to receive and utilise foreign funds in its bank accounts even as the U.K Parliament debated the issue, seeking to know if the British government had raised the issue of blocking of overseas funds of the MoC and other NGOs with India.

There are 1,030 NGOs eligible to receive foreign donations in West Bengal and the MoC was added to the list.

The registration of nearly 6,000 NGOs ceased to operate from January 1 as the MHA refused to renew their application or the NGOs did not apply for renewal.

MHA had earlier said in a statement that the MoC’s renewal was refused on December 25 for not meeting the eligibility conditions. It said that its license was valid till October 31 but was extended till December 31 along with other associations whose renewal is pending.

An MHA official said on January 1 that the Ministry declined to renew the FCRA registration of 179 NGOs, while 5,789 associations did not apply for a renewal before the December 31 deadline. The deadline for those NGOs who had applied before December 31 and whose application was not rejected have been given an extension till March 31.

According to the 2020-21 annual financial returns filed by the Kolkata registered NGO on December 13, the total balance in its foreign contribution bank account stood at ₹103.76 crore. It has more than 250 bank accounts across the country to utilise the foreign funds.

The Ministry had asserted that NGOs whose request for renewal was turned down will not be eligible to either receive or utilise the foreign contribution in their designated bank accounts.