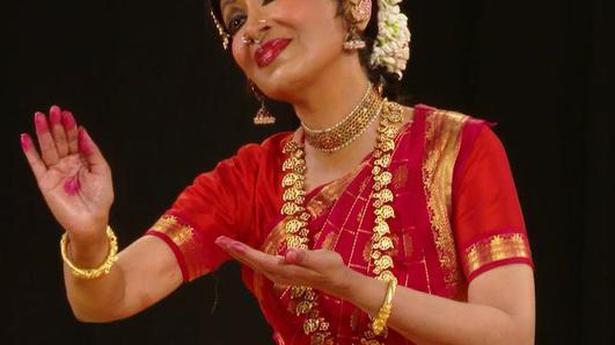 
Alarmel Valli’s style has a whimsical charm, enhanced by lilting music and quick rhythmic patterns. Her dance reflects the joy of performance and also the hard work.

At the Music Academy Digital Dance Festival 2022, Alarmel appeared in pink and gold for the opening ode to Lakshmi, Saraswati and Durga, tuned by Prema Ramamurthy and S. Rajeswari in a melodious mix of ragas in talamalika. The piece was interspersed with delightful, brief swara passages, which had a touch of solemnity.

Alarmel presented a Sankarabaranam padavarnam, a Tamil adaptation of the Telugu ‘Samikki sari evvare’ (Adi). Interestingly, she found spaces to fill in with melody and rhythm. In the sahitya portion of the pallavi, revealing the identity of the nayaka, she danced to a nadai-bedam flute interlude, revelling in nature’s bounty.

The jathis had a good mix of geometry and lasya, lines and curves, although one found them a bit long. In the tradition of bhakti-shringara pieces, Alarmel turned devotional in the anupallavi, admiring the procession of Rajagopala. From the charanam however, the varnam was about Kama and his love-darts enhancing the shringara rasa.

The musicians were immersive — one could hear the chirping of the birds (J.B. Sruthi Sagar on the flute) during the last charana swara. Vasudha Ravi’s melody was enriched by one more instrumentalist, K.P. Nandini (violin), adding to the richness of the orchestration. Handling the rhythmic nuances with involved precision were C.K. Vasudevan (nattuvangam) and Shaktivel Muruganandam (mridangam). The lighting was by Murugan Krishnan and costumes by D.S. Aiyyelu.

Alarmel’s choice for abhinaya was an unusual but rather topical ‘Pushpa Vilapam’ (Jandhyala Papayya Sastri, tuned in ragamalika, talamalika), where a devotee is torn between plucking flowers for worship or letting the ‘sentient’ flowers be. The flowers accuse the man of cruelty, when he plucks the tender buds and pierces them with a needle to thread them into garlands or boils them to make perfume when they willingly scent the air and feed the bees. It was built into a poignant narrative by the dancer, who then finished with an energetic Abhogi (Adi) Nritta Lahari.