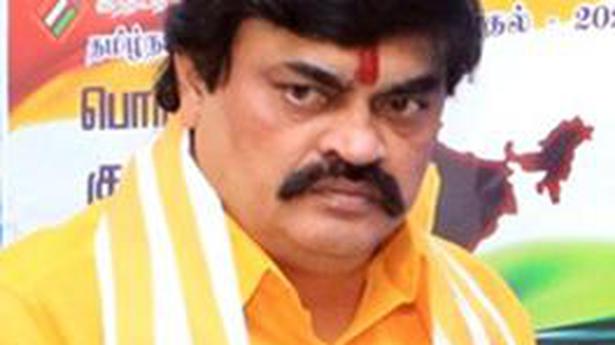 
An advocate, who represented former Minister K. T. Rajenthra Bhalaji’s sister K. Lakshmi, in the plea that sought a direction to the Virudhunagar police not to harass the former Minister’s family members in the name of inquiry, moved the Madurai Bench of the Madras High Court on Monday alleging that the police had trespassed into his apartment and conducted a search.

Advocate E. Marees Kumar said that on December 29, 2021 at around 2.10 p.m. a team of six police officials led by Inspector Sivabalan of the Madurai Rural Police came to his apartment near Mattuthavani bus stand and searched his apartment. Marees Kumar said that he was not at home when the police arrived. His wife had informed him over the phone that police in plainclothes were conducting a search in their apartment.

When he rushed back home at around 2.30 p.m, the police team was coming out of the apartment’s elevator. The police officials questioned him about the whereabouts of the former Minister to which he told the police officials that he was only discharging his duty as an advocate. He said that the police also enquired about his Senior Advocate M. Ajmal Khan. Except for Inspector Sivabalan the other officials did not disclose their identity, he said.

During the course of the hearing, Inspector Sivabalan was contacted over phone. He told Justice G. R. Swaminathan that he had led a team of police officials that went to the advocate’s apartment. He said that he had done so on the instructions of Superintendent of Police V. Baskaran. It was also confirmed that the police did not have a search warrant.

Taking note of the submission, Justice Swaminathan directed Inspector Sivabalan to file a counter affidavit in the case. The court also directed Superintendent of Police Baskaran to file an affidavit as to whether he had authorised the Inspector and his team to inquire the advocate. Taking note of the fact that the advocate’s apartment was located within the limits of Madurai city, the court wanted to know how the Madurai rural police was authorised to go to the advocate’s apartment. The hearing was adjourned till January 7.