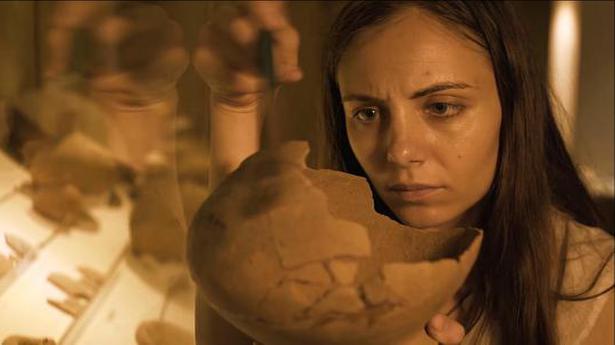 Avant-garde filmmaker Vipin Vijay has always been unafraid of excavating his imagination to weave cerebral stories on screen. His latest non-feature film, small-scale societies, is one such experiment that is as thought-provoking as it gets. The film, which Vipin calls “an exploration of archaeological imagination,” won a Special Jury Award (non-feature film) at the 67th National Film Awards. The Kerala-based filmmaker has previously won the same award for his short film, Poomaram, in 2007.

small-scale societies, which is set to be screened at the upcoming International Documentary and Short Film Festival of Kerala in December, started life as a video installation, commissioned by artist and curator Riyas Komu, for the annual Serendipity Arts Festival, a multidisciplinary arts festival, held in Goa.

“It’s neither a documentary nor a feature film. It’s rather, a freewheeling exercise with no definable script and no destiny. It was simply meant for linear display in a museum gallery, among other works of art from across South Asia, in an old building in the heart of Goa,” says Vipin, who is presently head of the department of direction, at the KR Narayanan Institute of Visual Science and Art in Kottayam.

In the video installation-turned-non feature film, two living bodies have been ‘installed’ within a museum space, scattered with archaeological relics, ‘where acts of sacrifice and resurrection are being performed like a re-enactment of a lost and forgotten ritual.’ Liberally interspersed are stunning visuals of off-the-beaten-track prehistoric archaeological sites and the life around the sites, which add another dimension to the connection to the past. Among those sites featured are the palaeolithic Toba volcanic ash deposits in Jwalapuram, Andhra Pradesh, megalithic burial grounds in Thrissur and rock shelters with cave paintings in Chhattisgarh, to name a few.

“In all these sites one possibly can sense the interplay of life and death, dream and reality, embodied sense of ground and hallucinatory perceptions in altered states of consciousness, which all seem to merge together,” writes Vipin in the director’s note attached to the film.

He explains that at its core, the film delves into the possibilities of ‘archaeological imagination’ and the ‘geographies of archaeology.’ “The projected uncertainty about the past gets redefined within us constantly, doesn’t it? The film is a primary sort of idea: visit a site that’s often uncharted, explore how it is connected to history, how it resonates with the cultural energy around… It talks of archaeological concerns of how we dig up and interfere with the past only to create confusion.”

It’s a work that stems from the filmmaker’s keen interest in archaeology. “I’ve always been passionate about archaeology as a discipline. Many of my previous films have been shot at archaeological sites,” he says, adding that small-scale societies is a result of extensive research on potential sites and relics, museum visits and conversations with archaeological conservators and collectors.

He is also keen to draw parallels between the archaeological process and filmmaking. “I find both to be very similar. Both the archaeological process and filmmaking form a document as an encounter, and they are in effect encounters within the spaces. They are both reproductive art forms, wherein we make images that are traces of the past,” he explains.

In fact, small-scale societies is the first of a series of films that he has planned on the subject. The next film in the series explores the ‘archaeology of death.’ “Archaeology straddles the boundary of science and humanity, presently with more of an incline towards science. My idea is to bring the concerns of humanity back to archaeology,” he says. Meanwhile, Vipin is also working on a “huge” fiction feature film project, a marked departure for a director known for his thoroughly experimental takes. Watch this space.