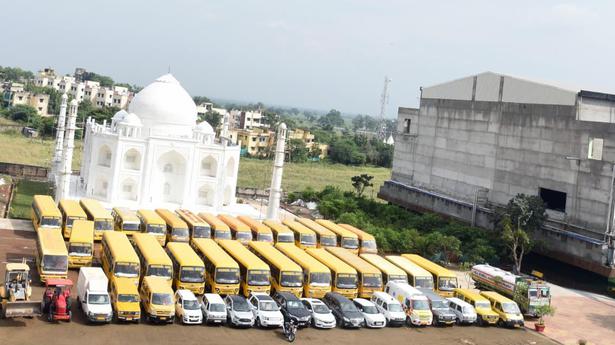 This Taj Mahal replica was constructed by Anand Prakash Choukse who runs an educational institute in Burhanpur, where Mumtaz Mahal had breathed her last

A man from Madhya Pradesh’s Burhanpur has built a house modelled on the world-famous Taj Mahal. But unlike Mughal emperor Shah Jahan, this local replica is not a “monument of love” per se and its owner says he wanted to spread the message of love, communal harmony, and the pride of Burhanpur, which is associated with Mumtaz Mahal.

This Taj Mahal replica was constructed by Anand Prakash Choukse who runs an educational institute in Burhanpur, where Mumtaz Mahal had breathed her last.

The Taj Mahal in Agra, often cited as one of the wonders of the world, was commissioned by Shah Jahan to act as the tomb of Mumtaz Mahal.

The magnificent Taj Mahal house is constructed on an area of 8,000 sq. ft with four bedrooms located on two floors, a meditation hall, and a dome over three years, Mr. Choukse told PTI on November 23.

He didn’t reveal the construction expenses but said it didn’t cost him much.

Mr. Choukse said he built the home modelled on the original Taj Mahal not only to give the message of love but also of brotherhood between Hindus and Muslims. Another reason for erecting the Taj Mahal replica in Burhanpur was that the city is associated with Mumtaz Mahal, he said.

“We run an educational institute here where 1,500-1,700 students are enrolled. Also, many children from neighbouring areas and even from abroad are studying in our residential facility. Parents coming from far-flung areas used to ask us about the speciality of Burhanpur and therefore we decided to tell them about Mumtaz’s history by constructing a Taj Mahal in the city itself,” he said.

When asked whether he has constructed the Taj Mahal home as a gift of love for his wife, Mr. Choukse said, “Not just to give the message of love, but also of brotherhood as both Hindus and Muslims have been living in this historical city in harmony and love each other. That is why I decided to construct a house similar to the Taj Mahal so that people coming here will come to know about its historical value”.

He said the Taj Mahal replica is located on the campus of his institute overlooking a hospital and a school, near the district collectorate.

When asked whether his wife had asked him to construct a Taj Mahal-like home for her, Mr. Choukse said she never did, but when he decided to construct the same, she insisted on having a meditation hall inside the replica.

According to Mr. Choukse, the Taj Mahal home is designed and built by local experts and marble work was done by artisans from Agra.

As per historical accounts, Mumtaz Mahal died in the Shahi Mahal in Burhanpur in June 1631. Her mortal remains were preserved for six months in a grave known as Ahukhana before they were shifted to Agra, where the original Taj Mahal was later constructed.

Local historians said Shah Jahan initially wanted to build the Taj Mahal on the banks of the Tapti river in the Burhanpur district but chose Agra due to some reasons.

Ahukhana still exists in Burhhanpur but it is not maintained as per its glory, they said.