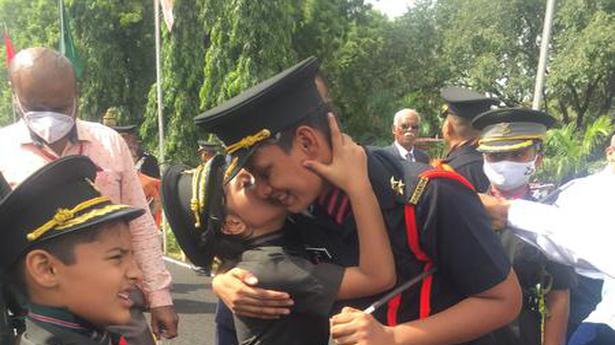 
Three years ago, Jyoti Nainwal was left devastated when her husband Deepak Nainwal died during the Army’s counter-terrorist operation in Jammu and Kashmir. On Saturday, this mother of two became a newly commissioned Army Officer at the Officers Training Academy (OTA) in the city.

“He suffered a gun shot in April 2018 during a terrorist encounter, was hospitalised for 40 days and died in May. He gifted us a life of pride and I’m trying to carry it forward,” Ms. Nainwal said, in an video released by the Press Information Bureau.

She was among the 178 cadets who were commissioned into the Army in the ceremonial passing out parade of the OTA. Of the 178, 124 were gentlemen cadets of the SSC-112 and 29 women cadets of SSC (W); also, 25 cadets from friendly foreign countries too finished their training here, according to a press release.

The Reviewing Officer complimented the officer cadets and Staff of the Officers Training Academy on the excellent all round standards achieved. He exhorted the Cadets of the passing out Courses to always adhere to the core military values of ‘Selfless Service to the Nation’ and strive for excellence in all their endeavours.

Among those who passed out on Saturday, include seven Afghan National Army cadets. They will soon report to their embassy in New Delhi.

One of the officers commissioned was Dimple Bhati. “In younger days when we were in school, we used to go for sports practice. Our neighbours would stop us and ask [our parents] why girls are going for hockey and other games. To that my parents would respond by saying daughters are not less than sons,” she said. Her sister Captain Divya Bhati was present during the occasion.