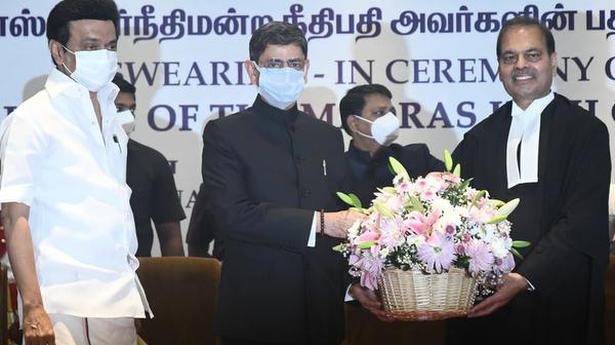 “I will not say much today but you will see it in action,”Acting Chief Justice Munishwar Nath Bhandari told a gathering at the Court on Monday, after he was administered with the oath of office by the TN Governor

Later, in the High Court, Advocate General R. Shunmugasundaram and office-bearers of the Bar Council of Tamil Nadu and Puducherry as well as various Bar associations, welcomed the ACJ.

In his reply to the welcome address, ACJ Bhandari assured the Bar that he and his companion judges would serve the litigant public without fear or favour in accordance with the oath that they had taken. “I will not say much today but you will see it in action,” he told the gathering after expressing happiness over having got an opportunity to preside over the prestigious Madras High Court.

During his stint at the Allahabad High Court, he had served as its Acting Chief Justice between June 26, 2021 and October 10, 2021.

According to court sources, Justice Bhandari would be considered for the post of Chief Justice of Madras High Court after December 23 this year.

At present, two judges — Raghvendra Singh Chauhan and Mohammad Rafiq — from his parent Rajasthan High Court are serving as Chief Justices of Uttarakhand and Himachal Pradesh High Courts. Of them, Chief Justice Chauhan is due to retire from service on December 23.