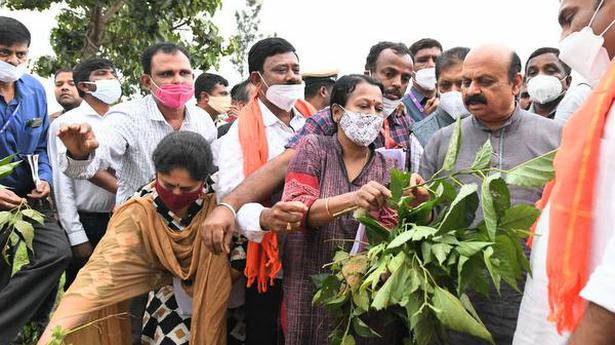 
The State Government has estimated the extensive damage in South-Interior Karnataka region due to untimely rains in November in which 24 persons have died and crops on 5 lakh hectares have been destroyed.

Chief Minister Basavaraj Bommai, who held an emergency meeting on Sunday night, has ordered a joint survey to assess the exact extent of damage.

As much as ₹689 crore, available with Deputy Commissioners, will be utilised for relief work and ₹1 lakh will be released as first instalment for those who lost their homes. Finance Department has been directed to release ₹500 crore for repair of roads to PWD and RDPR Departments.

As per preliminary estimate, over 2,200 km of road network, 165 bridges, 1,225 school buildings, 39 public health centres have been damaged due to rains across the State. As many as 658 houses have been damaged completely and 8,495 homes have suffered partial damage.

Mr. Bommai has directed release of ₹25 lakh to each zone in BBMP limits for pothole filling and irrigation tank repair would be taken up on war footing.

He also inspected the areas flooded due to the overflowing Kandavara Lake in Chickballapur city and directed officials to prepare a Detailed Project Report for building a storm water drain between Kandavara and Gopalakrishna Amani Lakes, to prevent flooding in the future.