Bypoll defeat was ‘timely alert’, should not be seen as govt’s final assessment: HP CM Thakur 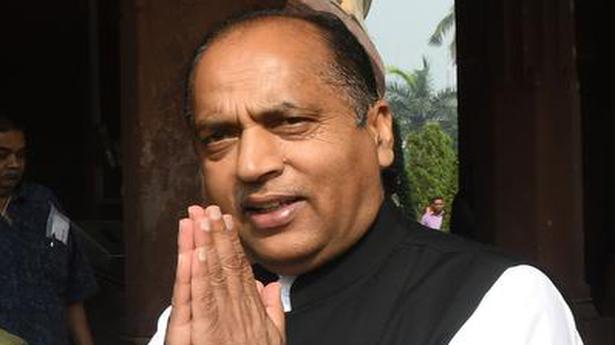 “For reasons behind the party’s defeat in these bypolls, a deeper analysis is required.”

Describing its defeat in the Himachal Pradesh bypolls as a “timely alert” for the BJP, Chief Minister Jairam Thakur has said it should not be seen as the final assessment of his government, suggesting that the party was let down by “overconfidence”.

In the recently held bypolls in the state, the BJP lost in the Arki, Fatehpur and the Jubbal-Kotkhai assembly seats, and also in the Lok Sabha seat in Mandi. In the 2019 general elections, the party had won Mandi with a comfortable margin.

Mr. Thakur said there were several reasons behind the party’s defeat in these bypolls, for which a deeper analysis is required.

“There could be various reasons for this defeat, but there was overconfidence in the rank and file of the party which cost us heavily in these elections. But it was a timely alert for us just a year before the assembly polls, and now, we will gear up and work hard to win,” Mr. Thakur told PTI in an interview.

On speculations of a possible leadership change in the state government, Mr. Thakur said he had been hearing such rumours since the very beginning of his tenure as chief minister of Himachal Pradesh.

“I have been hearing rumours and speculations of changing the chief minister in Himachal Pradesh from the very beginning. But one thing I can say with confidence is that manipulations don’t work in the BJP, especially under the leadership of Prime Minister Narendra Modi. So far, we had won all bypolls in the state, and this bypoll result should not be seen as the final assessment of my government,” he added.

On the bypoll results, Mr. Thakur said the BJP lost the Mandi Lok Sabha seat by a thin margin. The Congress had fielded Pratibha Singh, wife of the former chief minister late Virbhadra Singh, and she gained advantage from sympathy, he added.

This sympathy for Ms. Singh worked for the Congress in the other three seats as well, Mr. Thakur said.

On the BJP losing its deposit in the Jubbal-Kotkhai assembly seat, Mr. Thakur said the local leadership wanted the son of the late MLA to contest from the seat and the party’s local unit of that assembly segment had already started campaigning for him.

“But the BJP’s central leadership took a principled decision not to field a family member of any politician in the bypolls. As a result, another candidate was given the ticket, and the son of the late MLA contested as an Independent, which impacted the party’s performance,” he said.

Talking about the upcoming assembly elections, Mr. Thakur said the BJP has a strong cadre base and he will go around the state to inject fresh energy in them.