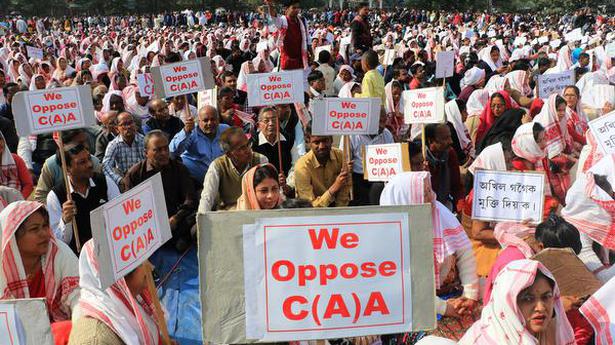 Prime Minister Narendra Modi’s announcement on repealing the three contentious farm laws has revived groups against the Citizenship (Amendment) Act in Assam with a protest planned on December 12.

The CAA seeks to fast-track the granting of citizenship to non-Muslims who fled religious persecution in Afghanistan, Bangladesh and Pakistan and took refuge in India till December 31, 2014.

A few organisations have decided to revive the anti-CAA protests that turned violent and claimed the lives of at least five people in police firing in December 2019. These organisations include the All Assam Students’ Union (AASU), the Krishak Mukti Sangram Samiti (KMSS) led by activist-turned-MLA Akhil Gogoi and the Asom Jatiya Parishad, a political party.

AASU adviser Samujjal K. Bhattacharya said the farmers’ persistence with protests has been a lesson for those at the forefront of the anti-CAA protests, which had to be paused due to the COVID-19 pandemic.

“We must make the Centre scrap the CAA, which is a serious threat to the identity of the indigenous communities in the northeast besides being against the Constitution,” he told reporters on November 20.

Appreciating the resilience of the farmers of northern India, Mr. Gogoi appealed to all the organisations to relaunch the anti-CAA movement together.

The Coordination Committee Against CAA, an umbrella body that had steered the protests in 2019 and the pre-lockdown months of 2020, has scheduled a protest on December 12 to mark two years of the anti-CAA stir.

Significantly, the Assam groups are not the only ones asking for a roll back of CAA. The Jamaat-e-Ulema-e-Hind and Amroha MP Danish Ali have also asked for the same.

Reacting to such demands, Union Minister for Minority Affairs Mukhtar Abbas Naqvi termed these calls as “communal politics” having begun again on the issue. Speaking at a mass wedding programme in Rampur, the Minister said the Act had nothing to do with removing citizenship from Indians and was about providing citizenship to oppressed minorities from neighbouring countries.

“Somebody says CAA should be repealed and Article 370 should be restored. These people know very well that CAA isn’t about taking away citizenship but providing citizenship to Hindus, Sikhs and other oppressed minorities in Pakistan, Afghanistan and Bangladesh,” Mr. Naqvi said.

“With the abrogation of Article 370, over 370 problems have been resolved in Jammu and Kashmir and Ladakh, and people have been brought in the mainstream of development and progress,” the Minister said.

(With inputs from PTI)