Will India face sanctions for S-400? | Worldview with Suhasini Haidar 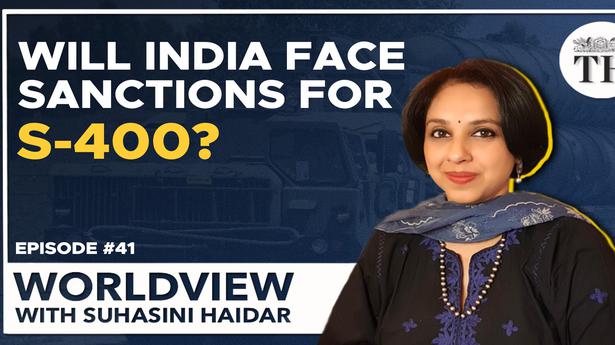 This week on worldview, we take a look at the American CAATSA law and the S-400 as India prepares to receive a Russian missile system, which could trigger US sanctions

Russian President Putin will be in India in early December and so will the Russian S-400 Triumf long range air defense systems — and the question is,  will the US government place sanctions on India, or will President Biden use his powers for sanctions waiver.

Countering American Adversaries Through Sanctions Act (CAATSA) is a 2018 American law, pushed by the Democrats during US President Trump’s tenure that mandates the US government to put financial sanctions, travel bans on any country or its officials who are part of transacting any significant defence or intelligence deal with Russia, Iran or North Korea. Remember this is a US law, not a UN rule or international law, and can be ignored by any country

What are the kinds of sanctions the U.S. can impose?

According to CAATSA, Section 231 and 235, the US President must impose no less than 5 of about 12 actions, that include

1.      Stopping credit lines from US and putting pressure on international banks like IMF

2.      Cancelling, blocking sales of licensed goods and technology- The US cancelled a deal to sell Turkey F-35 jets

3.      Banning banks, manufacturers and suppliers, property transactions from the sanctioned country, making it difficult to do trade

4.      Financial and visa sanctions on specific officials- With both China in 2018, and Turkey in 2020, the US froze accounts and cancelled visas to both the importing Defence authorities and their Directors.

What is India’s stand on the US sanctions?

–        Theoretically, India doesn’t accept or honour unilateral sanctions imposed by any country, and only follows the UN and international law

–        However, the Modi government made an exception to this precept when it decided to cancel its oil supplies from Iran and Venezuela under the threat of US sanctions in 2019. While the US had made a “carve-out” for Iran’s Chabahar port, India also reduced its planned investment in the Iran port and rail connectivity deal as well, due to other sanctions by the US on Iranian companies and oil entities.

–        On S-400, the Modi government has stood firm. In 2018, one year after the CAATSA law was passed, and after it became clear that S-400 could trigger US sanctions, India went ahead  with the deal, made advance payments through a rupee-rouble mechanism, and has now begun to receive initial parts shipments of the first of five S-400 systems it has bought for $5.43 billion dollars

–        When asked, the MEA said the possible sanctions were being “discussed” with the US government, acknowledging that India is not ignoring these US sanctions, but Indian diplomats have also said the S-400 is about India’s national security interests and cannot be cancelled

–        India has also made the point that Russia is a traditional or legacy defence partner, making up about 70% of its current arsenal. While India has grown its defence purchases from the US manifold, it is difficult to reduce Russian purchases beyond a point. Besides, the Military decided that the S-400 beat other market alternatives,

What are the US’s choices?

The Russian delivery of CAATSA parts this month has already thrown down the gauntlet for the US government, and it now has to decide what to do next.

1.      The US could go ahead, as it did with China and Turkey and announce financial sanctions on India, or on defence entities here

2.      Biden could delay the sanctions for six months at a time, and will need to certify that the waiver for India is “vital to the national security interests” of the US. This should not be hard, given that India is an important strategic partner to the US in the Quad, and US efforts at countering China’s actions in the Indo-Pacific.

3.      There is already a CAATSA amendment proposal brought about by 3 Republican senators called CRUCIAL: the Circumspectly Reducing Unintended Consequences Impairing Alliances and Leadership Act “ that would essentially build a waiver for the US’s Quad partners, and Democrats could help pass that in the upcoming December or January congress sessions. This would need Biden to certify that India is not  participating in quadrilateral cooperation on security matters that are critical to United States strategic interests before imposing sanctions on India.

4.      Biden could terminate the sanctions use against India, if he makes a determination that India “will not knowingly engage in activity subject to sanctions under subsection (a) in the future.’’ This is an assurance India is unlikely to ever give the US

5.      The fourth option, that the US seems unlikely to do, is to scrap the CAATSA law itself, given that it contravenes the UN order, is purely unilateral, and even whimsical, depending on which way the US’s relations are at. For example, the US placed sanctions on Iran, withdrew them and then reimposed them all in the space of a decade. The US treasury department lists no less than 35 different sanctions regimes that are in place at present.

The US is most likely to exercise option 2 for the moment, delaying the sanctions, but keeping the threat of CAATSA sanctions alive until it considers the other options. India is not only an important partner, any move to sanctions will backfire for the US, and could even cause India to strengthen its defence relationship with Russia. Finally it could weaken the US’s coalitions to counter China.

What could be some of the reasons if it doesn’t waive sanctions if expected to?

–        Waivers weaken the CAATSA law, which after all the Democrats brought to congress

–        A waiver to India will be protested by Turkey, a NATO ally which houses 2 US bases in Incirlik and Izmir. Turkey’s government will ask why they were sanctioned if India isn’t

–        The Biden government won’t want to encourage other countries, like Saudi Arabia to conduct defence deals with Russia in the hope of also getting a waiver. The US had offered Saudi Arabia the Terminal High Altitude Area Defense system THAAD when KSA entered discussions on the S-400.

Clearly the US is confronted with Catch-22 on CAATSA, and needs to recognise the perils of its unilateral sanctions. Apart from having little effect on the regimes it wishes to weaken, like Iran, North Korea and Russia, and impacting poorer people in the country instead, it is a clear contravention of the “rules based international law” that the US espouses, and bases its ties with India on. India’s tough stand on this must be unwavering, unlike the case of Iran oil.

– Economic Sanctions and American Diplomacy by Richard Haass in 1998

– Containing Russia: How to Respond to Moscow’s Intervention in U.S. Democracy and Growing Geopolitical Challenge by Robert Blackwill and Phillip Gordon

– American Dove: US Foreign Policy and the Failure of Force by Zachary Shirkey

– The Iran Wars: Spy Games, Bank Battles, and the Secret Deals That Reshaped the Middle East by Jay Solomon

– A New Era: India-Russia ties in 21st century by Nandan Unnikrishnan and others

– Iran´s Relations with Russia and India: Under the American Sanctions, by 3 authors, independently published