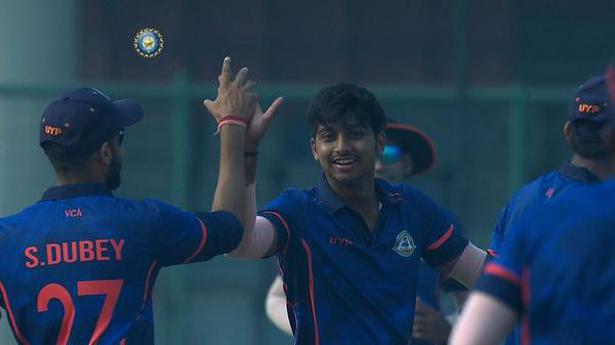 Four-in-a row for Nalkande as Vidarbha puts up a fight; Hyderabad surrenders meekly

As anticipated, Tamil Nadu and Karnataka will cross swords in the Syed Mushtaq Ali Trophy at the Ferozeshah Kotla ground on Monday.

For the third time in the knockout phase, Karnataka faced a close call. After beating Saurashtra by two wickets and Bengal in the Super Over, Karnataka just about managed, by four runs, to survive Vidarbha’s splendid resurgence. With Vidarbha needing 14 runs off the last over from Vidyadhar Patil, Karnataka ensured victory with a ball to spare after a wicket and five runs came off the first five deliveries.

Patil, who dropped two simple catches, could afford a smile and a final-ball boundary to Darshan Nalkande.

Pandey played the way he does. The idea to promote Abhinav Manohar also worked as he kept the run-rate up with a 13-ball 27 (2×4, 2×6). However, Karnataka failed to finish with a flourish.

The Tamil Nadu-Hyderabad match never rose as a contest. From winning the toss to finishing the job with a six, skipper Vijay Shankar got everything right.

Asked to bat, Hyderabad paid the price for lacking the application needed to survive in testing conditions and folded for 90. Medium-pacer Saravana Kumar’s disciplined bowling fetched him four wickets in the PowerPlay before Murugan Ashwin reduced Hyderabad to 39 for five in 6.2 overs.

TN’s catching stood out in accepting all 10 offerings, mostly inside the 30-yard circle, as Hyderabad’s search for big hits resulted in only four boundaries and three sixes.