HomeNewsAssam to be lab for language-based education, says Pradhan
News

Assam to be lab for language-based education, says Pradhan 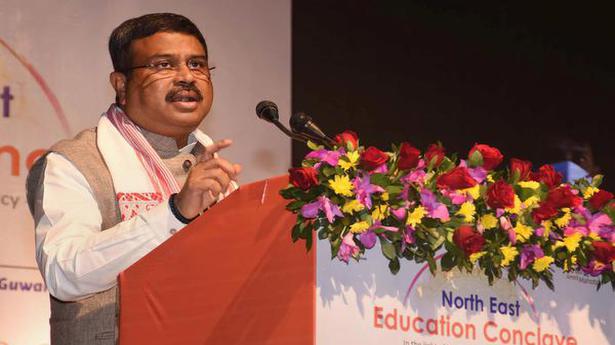 
Education Minister Dharmendra Pradhan said he saw Assam as the laboratory of the country’s language-based education in the next decade.

He was speaking at the North-East Education Conclave 2021 in Guwahati on Saturday.

“By the next decade, we are bound to implement the new approach on language. Whatever challenges may come, I see Assam becoming the laboratory of language-based and knowledge-imparting education system in the country,” he said.

He said some 180 languages spoken by the communities and tribes in the northeast are the country’s strength.

“More than 64 of these languages are spoken in Assam. I strongly believe the diversity of our language is the major unifying factor of our civilisation,” Mr. Pradhan said.

Stating that the National Educational Policy (NEP) has opened a lot of pathways, he said the focus should be on primary education with an emphasis on teaching in the mother tongue or the local language.

“I strongly believe that the diversity of our language is the major unifying factor of our civilisation. The NEP has amplified the possibility of language, giving importance to mother tongue, local languages,” he added.

The NEP, he said, was designed keeping the fast-changing world in mind.

“There are 26 crore students in India and 1.25 crore of them are studying in the northeast, primarily Assam. The NEP is the instrument and document for the transformative way in front of us. For humanity and civilisation, the challenge is how equal economic opportunities can be given to all sections of the society,” Mr. Pradhan said, praising the Assam government for spending 6% of its GDP on education.

Chief Minister Himanta Biswa Sarma said the new education policy will motivate the students to strive for excellence. “These education reforms will herald a new dawn for a new India,” he said.

He said his government has already started the process of implementing the NEP and the State Cabinet will approve the structure in its next meeting on November 25.

He also announced a plan for upgrading five colleges of Assam to universities in the next three years.

Five colleges of Assam will be given the status of university in the next three years. These are the JB College in Jorhat, Lakhimpur College, Nowgong College, Sivasagar College and Handique College in Guwahati.