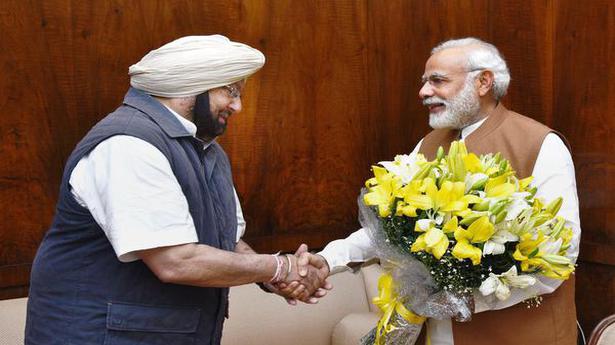 
The simmering anger against the BJP may not immediately mellow down among the farming community in Punjab after Prime Minister Narendra Modi announced a repeal of the controversial farm laws, but the decision has given enough impetus to the BJP to make inroads in the State ahead of the Assembly poll, due in early 2022.

In Punjab, the BJP and the Shiromani Akali Dal (SAD) were in alliance for the Assembly poll, on a seat-sharing formula in which the SAD would contest on 94 seats and the BJP on 23. However, amid the controversy over the Centre’s farm laws, the SAD — one of the BJP’s oldest alliance partners — decided to break away from the NDA coalition.

The BJP recently announced it would contest all 117 constituencies in the upcoming Assembly election. Even as a seat-sharing arrangement with former Punjab Chief Minister Amarinder Singh’s newly launched party — Punjab Lok Congress — is on the cards, an official declaration on it is still awaited. The BJP and Capt. Amarinder joining hands is being seen as a win-win situation for both.

Over the years, the BJP has been contesting the electoral battle in Punjab as a ‘junior partner’ in alliance with the SAD, but now the party has a wide-open field to explore its possibilities. In the backdrop of the emergence of ‘polarisation’ politics lately, the BJP could move in to woo the Hindu votes in the State, especially in the urban areas.

The SAD is seen as a ‘Panthic’ (Sikh) party and hence, largely, the Hindu voters have traditionally remained inclined towards the Congress. As the BJP in the past continued to contest with the SAD, the Hindu voters had kept away from the BJP; however, with the BJP now all set to independently fight the upcoming Assembly election, the fight to garner the support of Hindu votes between the Congress and the BJP would be critical for both parties.

Some political observers feel that with Punjab Congress president Navjot Singh Sidhu “over focussing” on Sikh issues to woo the ‘Panthic’ votes, the Congress may end up losing the substantial support of the Hindu vote bank.

In Punjab, which shares an international border with Pakistan, the narrative of “nationalism-nationalist”, surrounding which the BJP has been of late playing its politics, blends well with the personality of Capt. Amarinder, who has been raking the dangers of drugs and weapons smuggling from neighbouring Pakistan.

Not only this, the BJP has been making attempts to garner the support of the Sikh community by presenting itself as the party that, during the past seven years in the Centre, has worked towards the interests of Sikhs – be it the initiative to start the Kartarpur corridor, which connects the Kartarpur Sahib gurdwara in Pakistan with Dera Baba Nanak shrine in India’s Gurdaspur district, waiving of Goods and Services Tax from ‘langar’ (community kitchen) or granting Foreign Contribution Regulation Act registration to Gurdwara Harmandir Sahib (Golden Temple), enabling it to receive foreign donations.

“With the repeal of the farm laws, the BJP can now decently fight the Assembly election, especially they now get a good opportunity to contest in the urban areas of the State. The Opposition has lost a critical issue [farm laws] to corner the BJP. Besides, the BJP and Amarinder Singh’s party together can upset the electoral calculations of the ruling Congress and the Shiromani Akali Dal,” said Ashutosh Kumar, a professor with the political science department of Punjab University.

“With BJP and Capt. Amarinder all set to contest the upcoming election together, the Congress’s fight to retain power in Punjab is only going to get tougher. We will have to wait and watch how many Congress leaders align with Capt. Amarinder — the situation will unfold in the coming few days once the Congress decides on its candidates. There could be several disgruntled leaders who could join hands with Capt. Amarinder and play spoilsport for the Congress. Also, Capt. Amarinder is perceived as a secular leader, which could further help in garnering the Hindu vote bank for the BJP-Punjab Lok Congress alliance,” he noted.